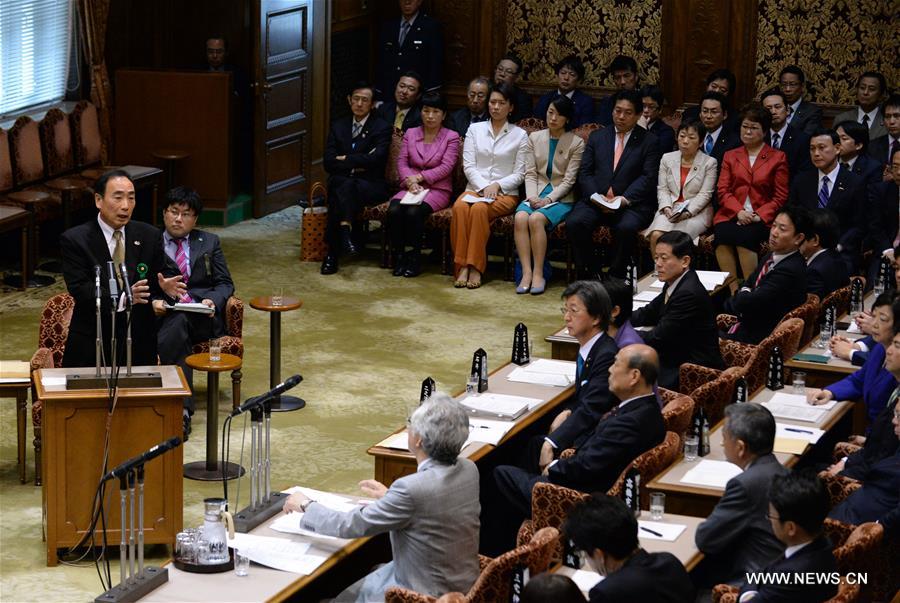 TOKYO, March 25 (Xinhua) -- The cut-price land deal scandal involving Japanese Prime Minister Shinzo Abe and his wife Akie is far from over and could pose serious risks to the prime minister's administration, according to local analysts.

The land had been intended for a new elementary school to be opened in April with the prime minister's wife Akie as its honorary principal, though she has since stepped down as the scandal has widened.

Yasunori Kagoike, head of the school operator, gave sworn testimony in both chambers of parliament on Thursday stating he thought the land deal involved "politicians' intervention."

He presented to parliament a fax between him and Akie Abe's aide, Saeko Tani, saying that the fax was evidence of the fact that Tani had made inquiries to the Finance Ministry about the land on his behalf.

He also said that Akie Abe gave him an envelop containing 1 million yen (8,900 U.S. dollars) on behalf of her husband before giving a speech at a kindergarten run by the school operator on Sept. 5, 2015.

Abe on Friday denied that he or his wife Akie were involved in the murky land deal and said that the testimony by Kagoike was regrettable and against the truth.

Analysts here generally believe that Abe's government has failed to clear suspicions regarding the scandal despite its wish to close the curtains by questioning Kagoike's credibility and making him look fraudulent in parliament.

"The core of the issue is that national land worthy of 953 million yen was indeed sold to this school," said Ukeru Magosaki, a former senior official with Japan's Foreign Ministry, adding that such a kind of deal could not be done without political involvement.

As he sees it, Kagoike's testimony shows that Akie Abe's involvement is possible, and a reason for the Abe couple to help in building the school could be that they and Kagoike share some similar views about conservative education.

Akie Abe had visited a kindergarten run by Moritomo Gakuen several times and gave speeches there. The kindergarten has recently been under fire for imposing on its students imperialistic-styled education and hate speech about Korean and Chinese residents of Japan.

Videos posted online recently showed that uniformed kids of the kindergarten were singing the Kamikaze song at the Osaka Gokoku Shrine, a local branch of the Yasukuni Shrine that honors Japan's 14 class-A war criminals.

The three- to five-year olds were also reciting in stilted Japanese the prewar Imperial Rescript on Education, an 1890 edict meant for nurturing "ideal" citizens that would sacrifice themselves for the emperor and the country.

"Should emergencies arise, offer yourself to the state," they chanted.

During her visit to the nursery school in April, 2014, Akie Abe said her husband highly approved of what the kids were learning there.

She also expressed her worry that the efforts to raise a new generation of Japanese nationalists could be dampened once these kids finish kindergarten and go on to other public schools that offer no such right-wing education.

"I thought Mrs. Abe had a deep understanding of our educational philosophies and she came to the school three times and viewed our facilities and classes," Kagoike told a press conference at the Tokyo-based foreign correspondents' club on Thursday.

Japan's opposition parties, while saying that Kagoike's testimony was "one-sided," called for Akie Abe and some other key figures to be summoned to parliament to give sworn testimony.

"It is necessary to arrange an opportunity to confirm the facts with Mrs. Abe under the same conditions (with Kagoike)," said Renho, leader of the main opposition Democratic Party. Sworn witnesses could be charged with perjury if they give false testimony in parliament.

"The curtain did not close on the problem (with Kagoike's testimony in the Diet), but rather just opened," said Renho.

The scandal has been eroding Abe's support rates and presents the most serious crisis for the prime minister since he returned to office in 2012, according to some analysts.

According to a recent poll by Nippon News Network (NNN), the support rate for the prime minister's cabinet dropped to 47.6 percent, down 7.3 percentage points from last month, while the disapproval rate increased 6.9 percentage points to 32.9 percent.

Hundreds of students and citizens rallied in front of the parliament building Thursday evening to protest against the scandal and demanded the truth.

They also voiced their opposition to the nationalist, imperialistic-styled school education seemingly encouraged by the Abe administration, as embodied by the education principles of the scandal-hit Moritomo Gakuen.

"Whether this (the scandal) will damage Abe's position (as prime minister) depends on the public reaction. So far the public is not satisfied with the explanation by the government," said Magosaki.

TOKYO, March 23 (Xinhua) -- Hundreds of students and citizens rallied in front of a parliament building Thursday evening to protest against a school land deal scandal that involves Prime Minister Shinzo Abe and his wife Akie, after a key figure in the scandal testified in parliament earlier in the day. Full story

TOKYO, March 23 (Xinhua) -- The head of a nationalist school operator in Japan at the center of a controversial cut-price land deal reiterated Thursday that he had received a donation of 1 million yen (8,900 dollars U.S. dollars) from Prime Minister Shinzo Abe's wife. Full story