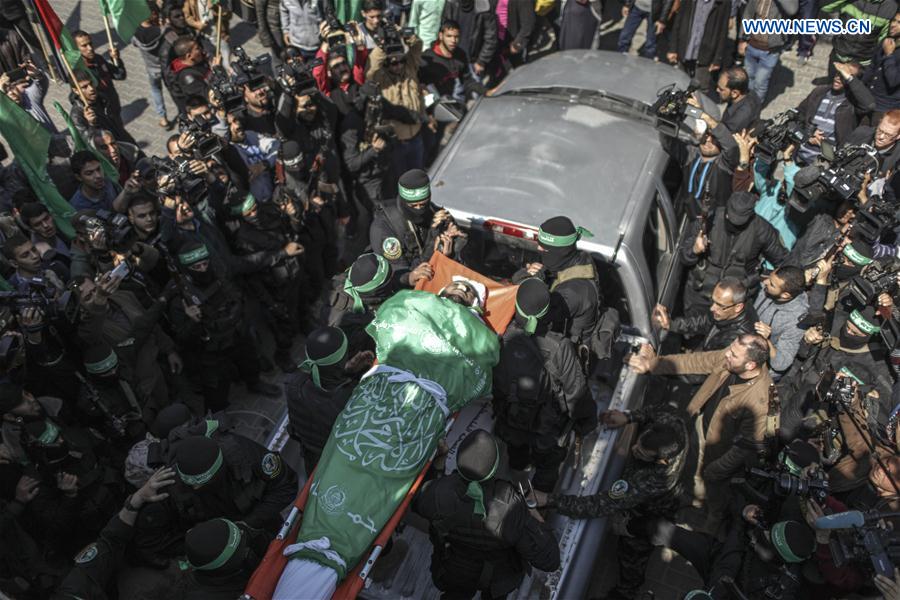 People surround the body of Mazen Fuqaha'a, one of the top and prominent Hamas militants, during his funeral in Gaza City, March 25, 2017. Islamic Hamas movement and Palestinian factions in the Gaza on Saturday held Israel responsible for the murder of Mazen Fuqaha'a, who was killed near his house in Gaza city, by unknown gunmen on Friday evening. (Xinhua/Wissam Nassar)

GAZA, March 25 (Xinhua) -- Islamic Hamas movement and Palestinian factions in the Gaza on Saturday held Israel responsible for the murder of a top Hamas militant, who was killed near his house in Gaza city, by unknown gunmen on Friday evening.

Hamas, which has been ruling the Gaza Strip after taking control of the territory in 2007, said in an official statement "Hamas and its Military Brigades hold (Israeli) occupation and its collaborators fully responsible for this crime."

On Friday evening, unknown gunmen shot Mazen Fuqaha'a, one of the top and prominent Hamas militants, with four gunshots into his head at the entrance of a building southeast of Gaza City, according to the Hamas-run ministry of interior spokesman Eyad al-Bozom.

Ashraf al-Qedra, spokesman of the Hamas-run ministry of health told reporters that Fuqaha'a had been apparently shot from a silencer into his head from a zero distance, adding that Fuqaha is from the town of Tubas, near the northern West Bank city of Jenin and he was born in 1979.

Ayman Batninji, Hamas-police spokesman in Gaza said in an emailed press statement that the police and other security apparatuses had opened an investigation to the incident. Hamas movement's statement said that it knows "how to behave with such kinds of crimes."

Right after Fuqaha'a was killed, Ismail Haneya, the deputy chief of Hamas and Yehya al-Senwar, the newly elected chief of Hamas movement in the Gaza Strip and other senior Hamas leaders went to Shifa Hospital to see the body, which was taken to the hospital after he was shot dead.

Hamas said in an official statement that Fuqaha'a is married and has two children, adding that he is one of the heroes of al-Qassam Brigades, Hamas armed wing, in the West Bank and one of the Mujahidin, who was released from the Israeli occupation's prison in 2011.

Egypt brokered a prisoners' swap deal between Israel and Hamas movement in October 2011, where more than 1,000 Palestinian prisoners, most of them were Hamas leaders and militants; Fuqaha'a was on of them. He was involved in killing nine Israelis in 2002.

Meanwhile, Fuqaha'a father, who currently lives in the West Bank city of Qalqilia told the Hamas-run al-Aqsa Television that Israel is fully responsible for the assassination of his son, adding "I haven't seen my son since 2002, and Israel had repeatedly threatened to assassinate him."

Right after local reports said that Fuqaha'a was killed, Palestinian factions and various militant groups, including Hamas armed wing, held Israel fully responsible for his murder and called that the Palestinian armed resistance allover the Palestinian territories must immediately revenge to his killing.

Dawood Shihab, spokesman of Islamic Jihad (Holy War) in Gaza said in an emailed press statement that "the assassination of Fuqaha'a is a crime and shows the future agenda of the occupation to fight the armed Palestinian resistance."

Fatah movement and the Popular Front for the Liberation of Palestine (PFLP) said in two separate statements that they condemn the assassination of Fuqaha'a and held Israel fully responsible for his death. The PFLP said the armed Palestinian resistance should immediately retaliate his death.

So far, there has been no official Israeli comment to the death of Fuqaha'a. However, Mustafa Sawaf, a pro-Hamas political analyst said the circumstances of murdering Fuqaha'a are similar to the circumstances of a Tunisian drones' maker who was killed in Tunis in October.