Retiring UN peacekeeping chief: missions will adjust to any possible slash in funding 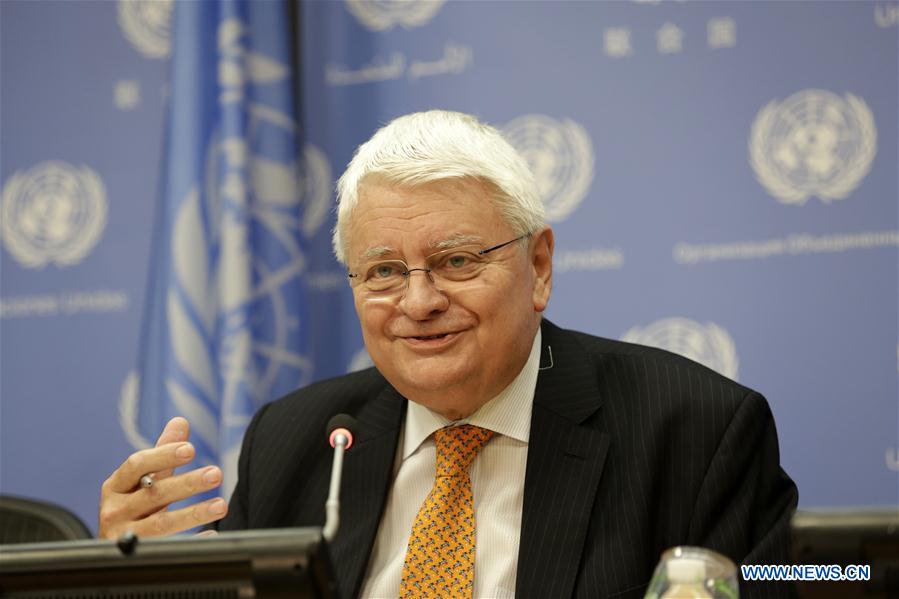 The UN under-secretary-general for peacekeeping operations, Herve Ladsous, was asked during a farewell session with reporters at UN Headquarters in New York if the UN Department of Peacekeeping Operations, which he heads, could live with a cut in U.S. contributions from 28 percent to 25 percent of the peacekeeping budget.

"We live with what we are given by the bodies of the United Nations and we adjust," he replied, saying that the UN General Assembly approves the budget and "makes decisions as to what monies are given and we adjust accordingly."

Ladsous also pointed out that a few years ago since he began in 2011 his department trimmed operating costs by about 1 billion U.S. dollars to the current 7.2 billion dollars. UN Budgets are for two years.

There have been numerous reports the new administration of U.S. President Donald Trump wants to reduce Washington's contribution to UN peacekeeping from the current 28 percent to 25 percent of the peacekeeping budget.

The United States is the largest single contributor to the regular UN budget as well as to peacekeeping funding.

Foreign Policy magazine reported in its online magazine on Friday the Trump administration "is seeking to cut 1 billion U.S. dollars in funding for U.N. peacekeeping" and to eliminate hundreds of millions of U.S. dollars for other U.N. programs that care for the impoverished, according to two diplomatic sources briefed on the plan.

However, the article was quick to point out such a proposal "is certain to face strong pushback from Democratic and Republican congressional leaders."

It said they have warned such a budget "will never be passed."

Ladsous declined to speculate on how such a massive cut would be handled, pointing out he is out of office next week, at the end of the month, and it would be up to his successor, Jean-Pierre Lacroix, to adjust to such possible funding cuts.

Earlier this month, Ladsous travelled to Mali and South Sudan with Lacroix, who, 56, will replace Ladsous on April 1.

However, Ladsous did say that because of work already in progress, "probably in a month or two we will have permanent capacity to deploy a vanguard brigade within 30-60 days," pointing out currently, "there was no way we could deploy any unit in less than six to eight months."

There has long been criticism of peacekeeping taking too long to deploy troops after being ordered through a mandate of the UN Security Council.

However, the world organization does not have a standing army, so it has to find a country willing to assign peacekeepers, then finding a place for them to situate and the necessary support and equipment needed for their mission.

Despite the trimmed budget, Ladsous said that "21st century technology" has been introduced to peacekeepers.

"Now so many of our missions have surveillance drones, have sophisticated detection equipment, balloons, cameras, radars," he said. "I think it has changed so much from the times of not so very long ago when people had just a pair of binoculars and an old-fashioned radio. It's gone ahead."

He was also pleased to report three UN peacekeeping missions soon would be winding down, "Ivory Coast right now, Liberia within a year, Haiti subject to a soon-to-come decision by the Security Council, but most likely will close down in October."

"We have made a policy of constant review so that we are as attuned to the needs and do not add strata on strata and actually adapt to new circumstances," Ladsous said. "We are trying to ... define some bench marks toward an exit strategy because some missions are not eternal. They should stick to a process and be able to adjust."

Performance linked to accountability was another topic.

"We have made a number of policies that draw consequences from the performance, or lack of, of people be it professional (or otherwise) when they don't do the job and commit errors of judgment and of action but also in terms of conduct," he said. That also refers to in particular, but not only, sexual exploitation and abuse (SEA).

In recent years, SEA has been a scourge of several missions -- many in Africa -- with some peacekeepers seeking sex or abusing victims who many times were only seeking food, supplies or other assistance.

He said a zero tolerance policy for SEA has been "strengthened by the latest report of the secretary-general that it is "standard policy and people are accountable for what they do."

But the undersecretary-general said one frequent challenge for peacekeepers in not-so-peaceful missions, especially those without a political solution, are the continuing questions: "Is there a peace to defend? Is there a peace to keep?"