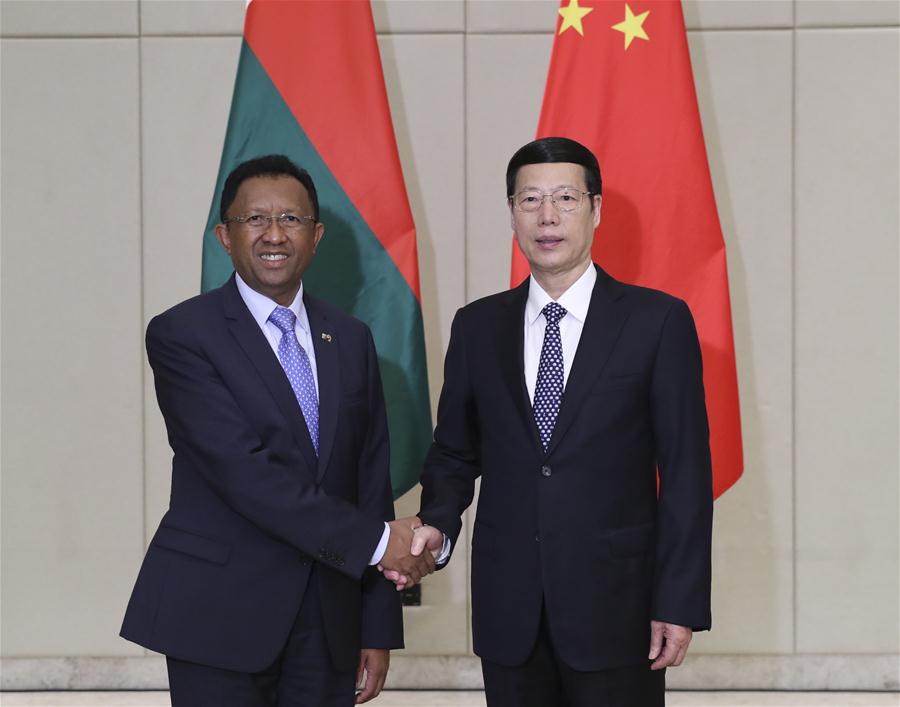 During his meeting with Hery Rajaonarimampianina, president of Madagascar, Zhang said that cooperation plans proposed by Chinese President Xi Jinping during the 2015 Johannesburg Summit of the Forum on China-Africa Cooperation (FOCAC) opened a new era of win-win cooperation for common development between China and Africa.

This year marks the 45th anniversary of diplomatic ties between China and Madagascar. Zhang said that China was willing to work with Madagascar to implement the FOCAC results and advance the Belt and Road Initiative through enhanced cooperation in agriculture, fisheries and manufacturing.

Rajaonarimampianina said it was in the interest of both countries to increase cooperation. Hailing China's role as an engine for global growth, he said China's support would help with development in African countries, including Madagascar.

Advancing economic globalization and free trade would bring more opportunities for all countries, he said.

China welcomes Micronesia to participate in the Belt and Road Initiative, Zhang said.

Calling China a "lighthouse of hope" for island countries, Christian said Micronesia appreciated China's long-term support for his country and would take an active part in the Belt and Road Initiative.

Calling China a close and sincere friend of Nepal, Dahal said Nepal was willing to enhance connectivity and advance cooperation with China in various fields.

During his meeting with Fazal Hadi Muslimyar, chairman of Mushrano Jirga, the upper house of the Afghan parliament, Zhang said the China-Afghan strategic partnership had maintained good momentum in recent years.

Important consensus was reached between President Xi and his Afghan counterpart Mohammad Ashraf Ghani during their meeting last year, Zhang said, adding that China hoped the two countries would cooperate on the Belt and Road Initiative and deepen cooperation in various areas.

Calling on both sides to align development strategies by advancing the Belt and Road Initiative as well as the Bangladesh-China-India-Myanmar economic corridor, Zhang said that he hoped the two countries would further cooperate and strengthen friendship.

Myanmar is committed to pressing ahead its comprehensive strategic cooperative partnership with China, Swe said.

Also on Friday, Zhang met with BFA Chairman Yasuo Fukuda, Vice Chairman Zeng Peiyan and other members of the BFA Board of Directors.

"The BFA has become a comprehensive platform with Asian features and global influence," Zhang said, adding that it had played a distinctive role in reaching consensus, advancing cooperation, boosting confidence in integration and building a community of shared future in Asia.

Zhang said he hoped the BFA would speak for Asia on major regional and international issues, expand its scope of discussions, and build wider partnerships to boost its global influence.

Fukuda said the BFA has become an open forum for elites from worldwide and an important platform for China to play an active role in international affairs.

"Asian economies' dedication to economic globalization and free trade is of high importance in light of the current international situation," he said, stressing that the far-sighted Belt and Road Initiative would win support around the globe.

Under the theme "Globalization and Free Trade: The Asian Perspectives," the four-day conference runs until March 26 and is expected to rally support for inclusive globalization. Zhang will deliver a keynote speech at the opening ceremony Saturday morning.