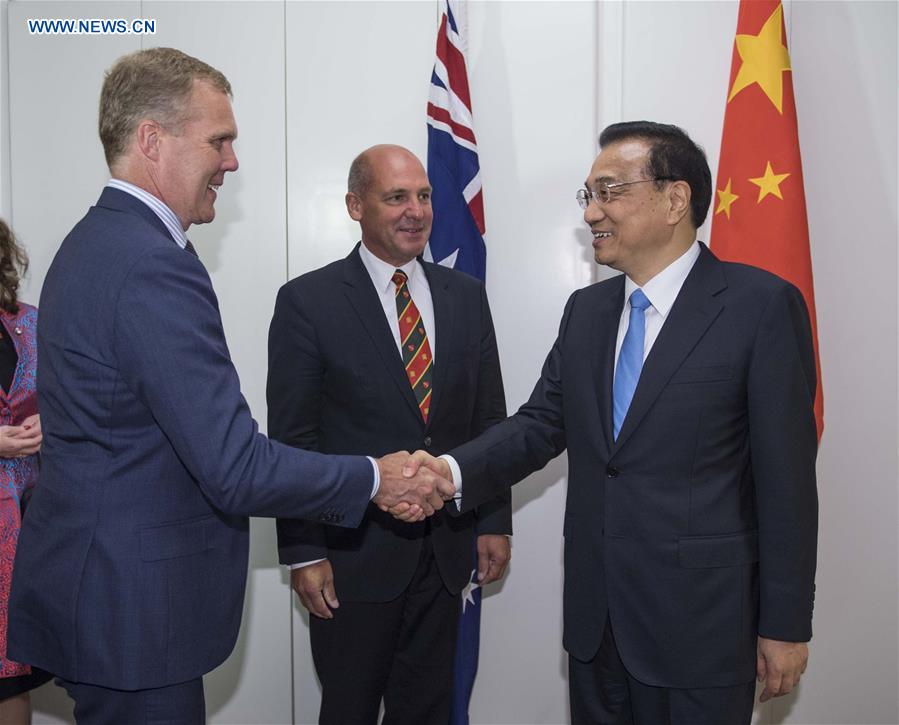 Li made the remarks when meeting with Australian Senate President Stephen Parry and Speaker of the House of Representatives Tony Smith in the Parliament House in Canberra on Thursday afternoon.

Legislature-to-legislature communication is an important channel for enhancing mutual trust and cooperation, he said.

China is ready to join Australia in stepping up their inter-government and non-governmental exchanges, as well as bilateral associations at local levels, and in boosting economic and trade cooperation so as to create a broader future for bilateral relations, he said.

"China is willing to strengthen the exchange between the legislatures of both countries to promote understanding and mutual trust, consolidate public support for bilateral ties, and provide lasting impetus for bilateral cooperation," said the Chinese premier, who arrived in Canberra on Wednesday night for a five-day visit to the country.

For their part, Parry and Smith said they highly appreciated Li's speech at the welcome luncheon held by Australian Prime Minister Malcolm Turnbull.

Australian Senate and House of Representatives value the relations and cooperation with the Chinese legislature and are willing to play an active role in promoting China-Australian relations, they said.

During their talks, Li said China would continue to work with Australian ruling and opposition parties to bring bilateral ties to new levels, adding that he hoped the Australian Labor Party would continue to make contribution to advancing the relationship between the two sides.

Shorten said Premier Li's speech at the luncheon conveyed a positive message that China is committed to maintaining peace and stability in the region and the world, boosting free trade and deepening friendship between the two peoples .

He also said that the Labor Party recognized China's important role in tackling global challenges and is willing to exert consistent efforts to boost bilateral ties, he said.

Li and Turnbull will hold the fifth annual meeting of the two prime ministers on Friday. They will attend a forum on China-Australia economic and trade cooperation in Sydney.

The Chinese premier will pay an official visit to New Zealand following his Australian tour. Li's visits to the two Oceanian countries are the first by a Chinese premier in 11 years.