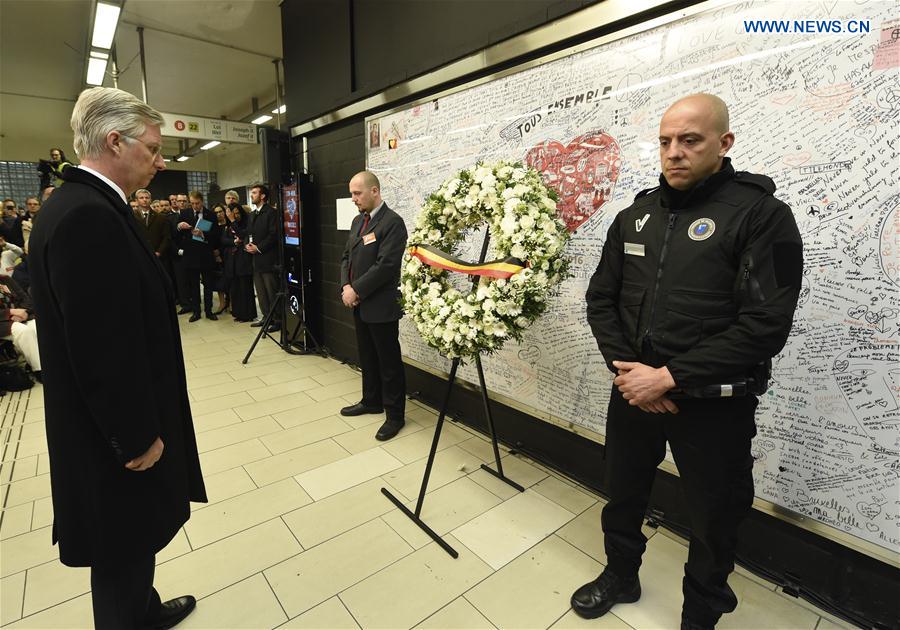 BRUSSELS, March 22 (Xinhua) -- The Belgian capital held ceremonies on Wednesday to commemorate the first anniversary of two deadly terror attacks, with the presence of the King and Queen of Belgium, and Prime Minister Charles Michel.

These ceremonies are organized by the Belgian government, Brussels Airport and metro system operator STIB, along with the families of victims.

At Brussels Airport, the ceremony began at 7:40 a.m. local time in front of the terminal. A minute of silence was observed at 7:58 a.m. while the commemoration ended at 8:10 a.m.

An official at the airport solemnly spelled out the names of the 16 people, of seven nationalities, who lost their lives that day at the airport, to the grave sound of a cello.

Eddy, who had lost his wife Fabienne Vansteenkiste in the bombing, paid homage by performing a song in English "Stars", which he composed himself.

The ceremony at the airport in homage to the victims ended with the re-inauguration of the statue "Flight in Mind" by artist Olivier Strebelle, which had been damaged during the attack when it was enthroned in The departure hall.

The statue represents not only a tribute to the victims, but also a sign of hope to future generations.

The royal couple and Prime Minister Michel, accompanied by several ministers, then respected another minute of silence for the 16 dead and the many others wounded in the other attack at a metro station.

At the same time, the entire STIB metro network will stop for one minute and the company staff will make a minute of noise.

The royal couple and senior officials arrived at the small Street of la Loi to witness the inauguration of a monument by Jean-Henri Compere, dedicated to all victims of the terrorist acts.

"It is our responsibility, each and every one of us, to make our society more humane and fairer. Let us learn to listen to each other, to respect each other and to correct our weaknesses," King Philippe said in a speech.

"And above all, let us dare tenderness. On this day of gathering and remembrance, our country owes you this commitment," the King said.