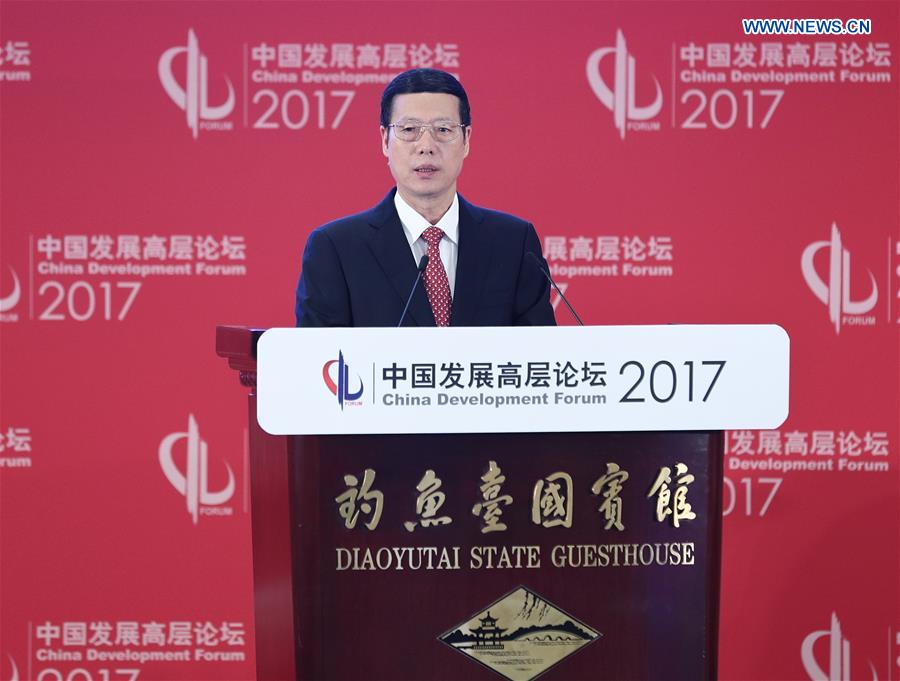 He made the remarks at the opening ceremony of China Development Forum 2017 (CDF) in Beijing.

Zhang highlighted the basic tone of "seeking progress while maintaining stability" and underscored the need for effort to maintain growth, ensure employment and counteract risks from home and abroad.

The country will prioritize de-stocking unsold houses in third- and fourth-tier cities as it fights speculation in the housing market, said the vice premier.

Key reforms will gain momentum to spur economic growth and market vitality, and the government will continue to cut red-tape to facilitate businesses, he added.

Meanwhile, China will remain committed to ensuring innovation drives development forward and will increase efforts to revitalize the real economy, he said.

"The real economy is the foundation of economic growth and we will optimize it," according to Zhang.

China will improve its capabilities in scientific innovation and boost development of strategic emerging sectors and modern manufacturing while transforming traditional industries with new technology and business models, he said.

The government will continue to promote entrepreneurship and the "Internet Plus" plan to meet the diverse needs of the market. Chinese companies will be encouraged to use craftsmanship to establish competitive brands that can stand the test of time, according to Zhang.

Prevention and control of financial risks will be elevated to a higher position on the government's agenda, Zhang pointed out, adding that China will manage risks in bad loans, bond default, property bubbles and Internet finance to avoid systemic financial risks.

Speaking of the close and complementary ties between China and the world economy, the vice premier stressed the need to resolutely advance globalization and fight protectionism.

"China is willing to join efforts with the international community to steer the world economy toward strong, sustainable, balanced and inclusive growth," he said.

The country will continue to implement its opening-up strategy and advance the Belt and Road Initiative, he added.

China will host the Belt and Road Forum for International Cooperation in May; a new chapter in win-win cooperation, he said.

More than 20 heads of state and government, over 50 leaders of international organizations, over 100 ministerial-level officials, as well as over 1,200 delegates from various countries and regions will participate in the forum.

The CDF, organized by the Research Development Center of the State Council, is a high-level meeting that gathers leaders from international institutions, academia and companies worldwide. It is usually held after the annual sessions of China's national legislature and political advisory body.

BEIJING, March 15 (Xinhua) -- China will build on the forward momentum and continue its economic structural reforms in 2017, in an effort to provide more opportunities for global growth.

Deepening supply-side structural reforms, aimed at mid- and long-term stable growth, will remain at the center, according to this year's government work report, which sets the GDP growth target for 2017 at around 6.5 percent. Full Story