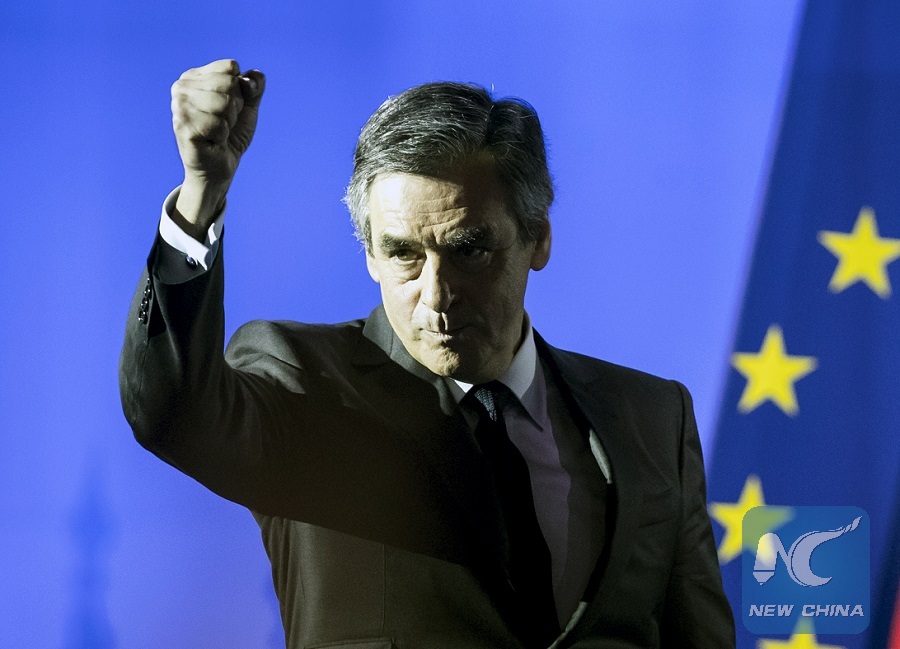 PARIS, March 19 (Xinhua) -- Eleven candidates will vie for the French presidency in the first round of voting in April, announced the President of the French Constitutional Council Laurent Fabius on Saturday, after the verification of the full list of political sponsorships.

Beyond the uncertainties which always loom over potential voting outcomes, the campaign has already promised a reconfiguration of the political landscape in France.

Three candidates -- Philippe Poutou of the New Anticapitalist Party, Jacques Cheminade of Solidarity and Progress, and the unaffiliated centrist representative Jean Lassalle were qualified at the last minute and will join the list of the first eight candidates that have each collected a minimum 500 signatures necessary to run.

The eight contenders are Francois Fillon of The Republicans, Benoit Hamon of the Socialist Party, Emmanuel Macron from En Marche!, nationalist Nicolas Dupont-Aignan from Stand up France, Jean-Luc Melenchon of Unsubmissive France, Nathalie Arthaud from the Worker's Struggle, extreme-right candidate Marine Le Pen of the National Front and the euroskeptic Francois Asselineau of Popular Republican Union.

Rarely has a vote been so undecided less than five weeks before the first round of voting. There is one certainty: The 10th presidential election of the Fifth Republic of France will be written into history. Never, in fact, has a campaign experienced so many shocks since General de Gaulle made the vote central to French political life.

The decision by current President Francois Hollande not to stand for a second term, and unexpected primary campaigns that concluded with the elimination of the seemingly uncontested favorite Alain Juppe are just some of the events which have contributed to plunging political observers into circumspection and public opinion into disarray.

It is important not to forget that it is also the first time that a presidential election is being held in France under a state of emergency.

A few hours before the publication of the final list of candidates, a man was killed in the Orly airport in Paris after trying to wrest a gun away from a defense soldier.

Undoubtedly, propositions from the candidates in terms of security and the fight against terrorism will return to the forefront of the campaign.

All the polls predict the arrival of the extreme-right National Front party in the second round of presidential voting for a second time in history thanks to a score definitively higher than that achieved in 2002 by Jean-Marie Le Pen, president of the party and father of Marine Le Pen.

No matter who will be her opponent in the second round, it is believed that Marine Le Pen will be beaten soundly. Despite everything, the scenario of a possible victory for the extreme right, leading to a potential Frexit from the European Union, continues to fuel all sorts of more or less irrational conjectures.

According to an Ipsos Sopra Steria poll conducted for the Le Monde newspaper and CEVIPOF (Political Sciences Institute) published Friday, Marine Le Pen (27 percent) and Emmanuel Macron (26 percent) would be neck and neck in the first round, ahead of an easily outpaced Francois Fillon (17.5 percent).

In the second round of voting, Emmanuel Macron would win with 61 percent of the votes, beating Marine Le Pen's 39 percent, according to the poll.

Several signs remain, however, that voters are generally uncertain and disinterested. Among people certain to vote, 41 percent say they could still change their minds.

Voter participation, as well, is projected at 66 percent of eligible voters, a relatively feeble level for a first round of voting in a French presidential election.

The formal investigation of Francois Fillon in a scandal around fake jobs that are alleged to have benefited his wife and his children will leave deep wounds among conservatives, even if the Republicans seem to have closed ranks for the moment.

According to an Odoxa poll published Friday, however, three quarters of French voters believe that Fillon is wrong to stay in the race.

The candidates of the two traditional political parties that have structured the French politics for decades, the Republicans and the Socialist Party, could both be eliminated in the first round of voting. This would be a historic event in the Fifth Republic.

Part of the voting base for the Republicans could be tempted by the extreme-right National Front.

Above all, the ascendance of the "catch-all" candidate Emmanuel Macron confuses the issue. The 39-year-old former investment banker and his "En Marche!" movement are seeking to propose a break with the traditional right-left divide.

Macron presented himself Thursday in Berlin as the most European candidate, and as the defender of the Franco-German alliance, during a visit to German Chancellor Angela Merkel.