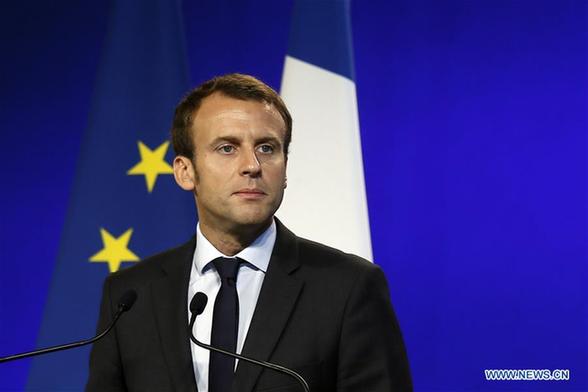 PARIS, March 19 (Xinhua) -- Few weeks ahead of France's presidential race, 11 candidates were qualified to compete for the Elysee Palace for the next five years, with independent candidate Emmanuel Macron emerging as the front runner.

As election is approaching, the contest to win France's top political job remains uncertain amid a series of surprises, starting with the outgoing Socialist President Francois Hollande's decision not to seek a second term.

Furthermore, fraud scandals have tainted Le Pen's bid and engulfed that of the conservative Francois Fillon, who has lost his top spot in the wake of the fake job affair and which is giving a boost to the independent challenger Emmanuel Macron.

In this campaign, the country's most unpredictable in decades, the centrist Macron and anti-immigrant Le Pen are likely to make it a clear two-horse race and voters will choose either liberalism or nationalism.

Launching his own bid, 39-year-old Macron, the former economy minister under Hollande's government, has been portraying himself as a "candidate for jobs," and proposing "progressive" measures to "pull France into the 21st century."

Neither in the left nor in the right, the former investment banker is campaigning for business freedom to inject dynamism and help cut unemployment.

After an unexpected vote for populism in the United State and "yes" vote for Brexit in Britain, eyes now are on France, where the far-rightists are challenging for power.

If winning the election, she vowed to renegotiate the European Union treaty, and restore internal borders and local currency.

With the announcement of the Constitutional Council, the campaign is therefore entering a new phase. This marks the beginning of a strictly equal distribution of speaking time, on radio and television, among the 11 presidential nominees.

France's presidential election will kick off on April 23. If no candidate wins a majority of votes, the top-score contenders will meet two weeks later on May 7 for a run-off.