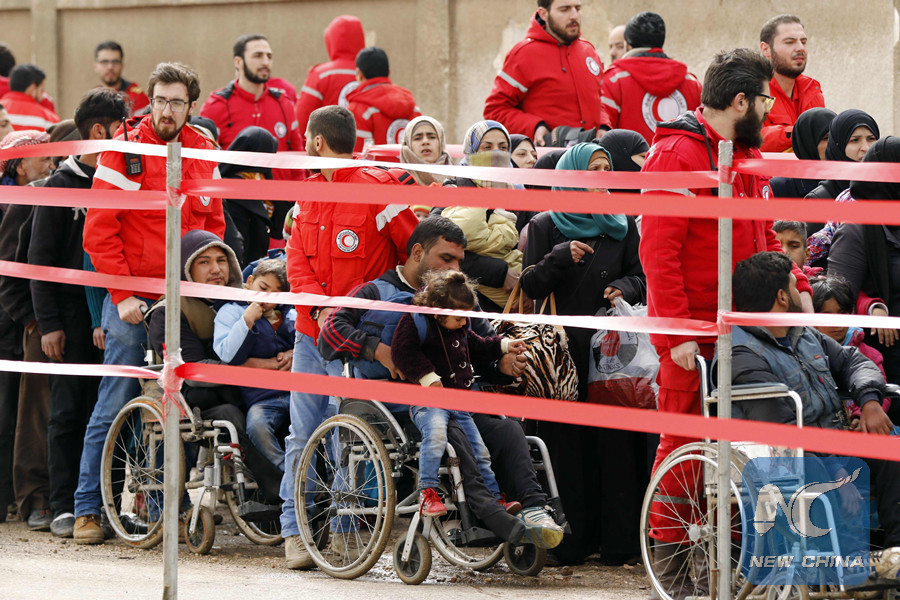 Syrian opposition fighters and their families are searched as they arrive at a checkpoint on the edge of the rebel-held Waer neighbourhood in the central city of Homs on March 18, 2017, during the first phase of the Russian-supervised deal to complete the evacuation of fighters and civilians. (AFP photo)

HOMS, Syria, March 18 (Xinhua) -- The central city of Homs will soon be free of any rebel presence, as the first batch of rebels and their families started evacuating their last stronghold in the city on Saturday under an activated deal with the government.

Busses ready to carry the armed rebels and their families were lined up at the entrance of the al-Wair neighborhood, with government soldiers, policemen, and several Russian military policemen, on alert to secure a smooth process that could see Homs city free of any rebel presence in a matter of days, or weeks, as al-Wair is the last rebel-held neighborhood in the city.

As many as 423 rebels and 1,065 civilians, who are family members of the rebels, evacuated al-Wair on Saturday, with the process ongoing until the evacuation of 10,000 rebels and their families from that large neighborhood at the western outskirts of Homs.

Government officials say those evacuating are from the rebels who refuse to embark on a "reconciliation" with the government, adding that they will be transported to rebel-held areas in the city of Jarablus in the countryside of the northern city of Aleppo.

Saturday's evacuation is actually not the first from al-Wair, as the original agreement for the rebel evacuation was reached in late 2015, when the first batch of rebels left the neighborhood. In 2016, another batch left, and the deal was mired later with renewed tension and battles, until being reactivated this month.

It's worth noting that the first two evacuations were done under the supervision of the UN, but the latest one was reached under the mediation of Russia, with no role of the UN in it.

The governor of Homs said that after the rebel evacuation, over 40,000 people will remain in the neighborhood.

For his part, Ammar Sibai, another official in the Homs Governorate, said that over 100,000 displaced people from al-Wair will return to their homes after the departure of the last rebel batch from the neighborhood.

Previous statistics said that al-Wair used to be a home for 300,000 people ahead of the eruption of the six-year-old war in Syria, and that the number decreased to 75,000 who were besieged by the government forces since 2014.

For the government, regaining the neighborhood is a significant progress that will make them in full control of the city of Homs, which is Syria's third largest city. It's also the heart of Syria due to its location in the central part of the city.

Homs is one of Syria's most important industrial centers, boasting the country's largest oil refinery and key oil and gas fields in its eastern countryside.

The city is also the hub connecting major Syrian cities with one another, and wresting full control over the city will be an important step in the government push to have full control over Syria's major five cities of Damascus, Homs, Latakia, Aleppo and Hama.

For the rebels, losing their last stronghold in Homs is a major blow, following the huge defeat they suffered when the government forces recaptured the entire city of Aleppo in December of last year, after the rebels' evacuation from the eastern part of that key city in northern Syria.

Homs was called the "Capital of Revolution" by the rebels, as it was one of the first cities to join the anti-government movement in Syria in mid-March 2011.

By mid 2012, up to a fifth of the city became under the opposition control. In the same year the government forces unleashed an offensive to capture the fallen areas.

In late 2014, the rebels in the old city of Homs accepted a deal for their evacuation from the ancient part of the city, which has been largely obliterated due to the military campaign in that part of the city.

In 2015, the deal for al-Wair was reached, similar to that of the of old city, before being reactivated on March 14 this year.

"This deal will be conducive in restoring peace and security to the city of Homs in general, and the al-Wair in particular. I think that the next few weeks will see the full evacuation of the rebels from the neighborhood and the return of normal life to the city," Barazi, the Homs governor, told Xinhua at the entrance of al-Wair Saturday.

Following the full evacuation of the rebels from al-Wair, the government efforts will be focused on achieving similar deals in the northern countryside of Homs, where the rebels still hold some areas.

"This deal will help in achieving similar deals in the northern countryside of Homs," Barazi added.

Meanwhile, a Russian officer at the site told Xinhua that his country is guarantor to the activated deal.

"This is why the Russian forces came to Syria, to help our friends restore normal life to this country, and the Russian side is the guarantor to the implementation of this deal in al-Wair and will monitor the execution of the deal," he said.