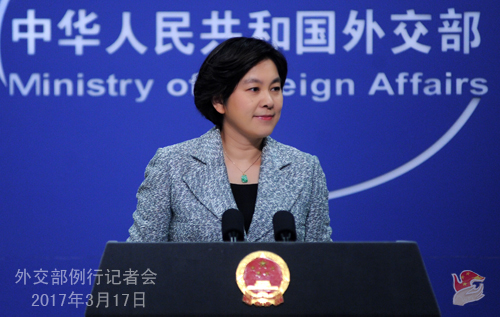 BEIJING, March 17 (Xinhua) -- China on Friday said its opposition to the Terminal High Altitude Area Defense (THAAD) was justified and sufficient, urging the Republic of Korea (ROK) to cease deployment of the U.S. missile defense system.

Chinese Foreign Ministry spokesperson Hua Chunying made the remarks at a daily press briefing in response to reports that many people in the ROK do not understand why China opposes the deployment.

"China understands the ROK's concerns with maintaining its own security, but THAAD harms strategic balance in the region and is not conducive to stability on the Korean Peninsula," Hua said, noting that THAAD may even make the ROK less safe.

Hua said the coverage of the THAAD missile defense system, especially the monitoring scope of its X-Band radar, went far beyond the defense needs of the Korean Peninsula and reached into the hinterlands of Asia, and could peer deep into Chinese territories.

"We do not oppose necessary measures that the ROK takes to maintain its national security, but such measures cannot be pursued at the expense of China's security," the spokesperson said.

"We again urges relevant parties to face up to the essence of the issue as well as China's legitimate concerns and stop the deployment," Hua added.

Yonhap news agency reported Thursday that the X-band radar, a core element of the U.S. missile defense system, will arrive the ROK in the near future.

"The ROK Foreign Ministry has clarified the issue, with the Chinese side, that the reports are untrue," Hua said, noting that China's opposition to the deployment of THAAD was clear and consistent.