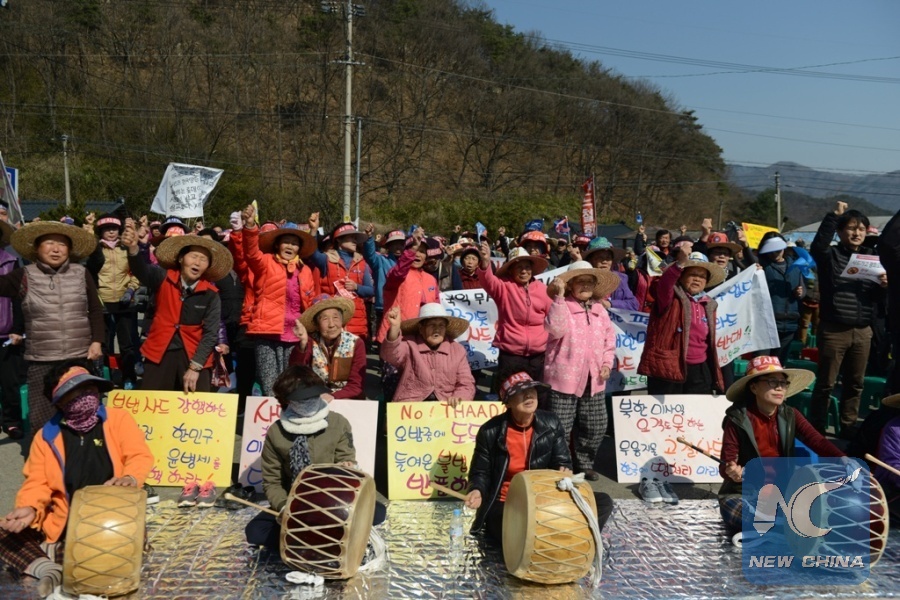 Protesters shout slogans during a rally near the golf course where the Terminal High Altitude Area Defense (THAAD) system will be deployed in Seongju, South Korea, March 15, 2017. (Xinhua/Liu Yun)

An unidentified South Korean military official was quoted as saying the X-band radar will not arrive here Thursday, but the official noted that the radar will make it to South Korea soon and be transported to a military base of the U.S. Forces Korea (USFK).

A local broadcaster KBS reported Wednesday that the AN/TPY-2 radar will get to the Osan air base, some 60 km south of the capital city Seoul, on Thursday morning.

An official with the Combined Forces Command (CFC) told Xinhua that the news reports cannot be confirmed.

The CFC official said via phone that even though other THAAD elements, including the X-band radar, arrive here, it will not be made public for operational secrets.

On March 6, two mobile launchers and part of the THAAD equipments got to the Osan air base and were moved to an unknown USFK base.

According to local news agency Newsis, the mobile launchers were transported to Camp Carroll, a USFK logistics base in southeast South Korea.

The base is just 17 km away from a golf course in Seongju county, North Gyeongsang province where the THAAD battery is set to be deployed.

Other THAAD elements would allegedly be kept in the base until the construction of the THAAD site is completed.

THAAD is composed of six mobile launchers, 48 interceptors, an X-band radar and the fire and control unit. Other elements are expected to be brought to South Korea one after another.

The hurried push for THAAD was aimed to make it more difficult to put back the deployment decision as an early presidential election is scheduled to be held here on May 9.

In July last year, Seoul and Washington agreed to install one THAAD battery by the end of this year. The schedule was advanced to sometime between June and August this year and now as early as next month.

Many observers said THAAD is a trigger to make South Korea become part of the U.S. missile defense networking in Northeast Asia to contain China and Russia.

China and Russia have strongly opposed the U.S. anti-missile system in South Korea as it breaks regional strategic balance and damages security interests of the two countries.

THAAD's X-band radar can peer deep into the territories of the two countries. 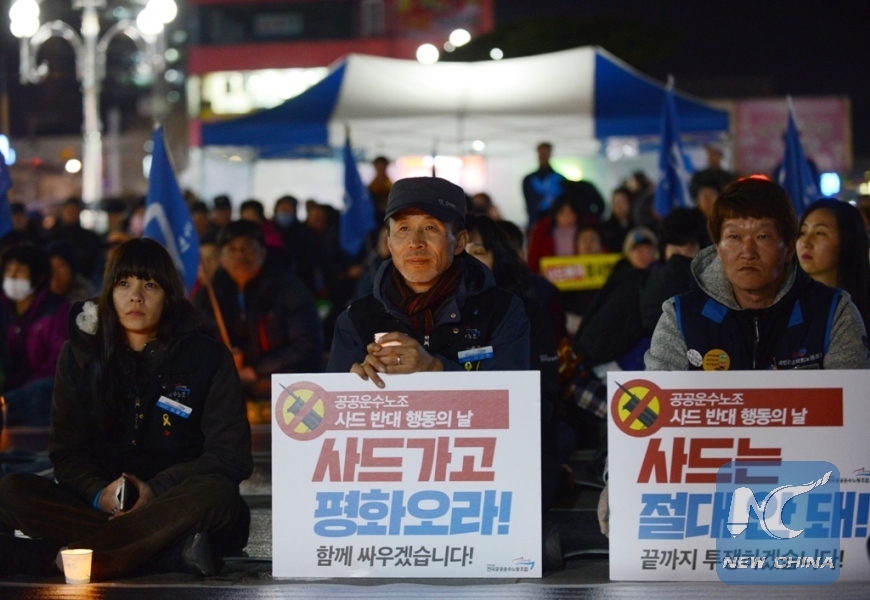 Political, religious and academic figures held an emergency meeting in central Seoul along with civic activists and residents living near a site where the U.S. missile shield is scheduled to be deployed as early as next month.

A resolution, signed by about 700 figures including the participants, was announced to ask South Koreans to join their fight for peace in the Korean Peninsula and against the THAAD deployment in their soil, while asking major presidential contenders to make efforts to reconsider the deployment decision from the very beginning.

The participants in the meeting chanted a slogan "Impeach THAAD" just as Park was impeached. Park became the first South Korean leader to be removed from office through impeachment.

The resolution said the THAAD deployment decision was the worst catastrophe in security and diplomatic policies under the Park Geun-hye government and that the worst policy is under way though people power ousted Park.

Two mobile launchers and part of the U.S. anti-missile system arrived in South Korea on March 6 and were moved to an unknown military base of the U.S. Forces Korea (USFK).

"When all public attentions were being centered on the impeachment ruling, Prime Minister Hwang Kyo-ahn went ahead with the THAAD deployment step by step," said Jeong Youn-soon, chair of Lawyers for Democratic Society, an advocacy group composed of lawyers.

Jeong said it is high time to show the "power of candle" as THAAD can be more important than Park's ouster with regard to peace and survival of people in the peninsula.

She promised to take legal actions against those who pushed the deployment that failed to follow proper procedures.

The hurried push for THAAD was aimed to make it more difficult to "walk it back," said Park Seok-min, co-head of an association of advocacy groups to prevent the U.S. missile defense system from being installed in their soil.

In July last year, Seoul and Washington agreed to install one THAAD battery by the end of this year. The schedule was advanced to sometime between June and August this year and now as early as next month.

The advanced schedule indicated a ploy in the conservative bloc to politicize the THAAD issue during the election period, said Sim Sang-jung, chair of the minor opposition Justice Party and the party's presidential candidate.

Sim said the issue can cause a split between liberal and conservative voters, which can provide an opportunity for conservative politicians attempting to win back presidency.

The conservative bloc, which fell together with Park's downfall over her corruption scandal, denounced opponents to the THAAD deployment as blind followers of the Democratic People's Republic of Korea (DPRK).

The Justice Party chair said even the rational opposition to THAAD was treated by the conservative camp as blind support for the DPRK, urging all parties concerned to immediately stop any attempt to politicize security issues.

Seongnam city mayor Lee Jae-myung, one of the three key presidential contenders of the biggest opposition Minjoo Party, signed the anti-THAAD resolution though he failed to participate in the gathering.

The resolution said THAAD is not necessary for anywhere in South Korea as it is not a defensive weapon against the DPRK's nuclear threats but a trigger to make South Korea become part of the U.S. missile defense networking in Northeast Asia to contain China and Russia.

China and Russia have strongly opposed the U.S. anti-missile system in South Korea as it breaks regional strategic balance and damages security interests of the two countries.

The worsened relations of South Korea with China and Russia, caused by the THAAD deployment in the peninsula, would make it more difficult to resolve the DPRK's nuclear issue under the name of which Seoul had pushed for it, the resolution said.

China and Russia are major negotiators in the long-stalled six-party talks to denuclearize the peninsula along with South Korea, the DPRK, the United States and Japan.

The THAAD site was changed in September into a golf course closer to Gimcheon city bordering the county.

Residents in Seongju and Gimcheon have held candlelit vigils every night since the decision was announced.