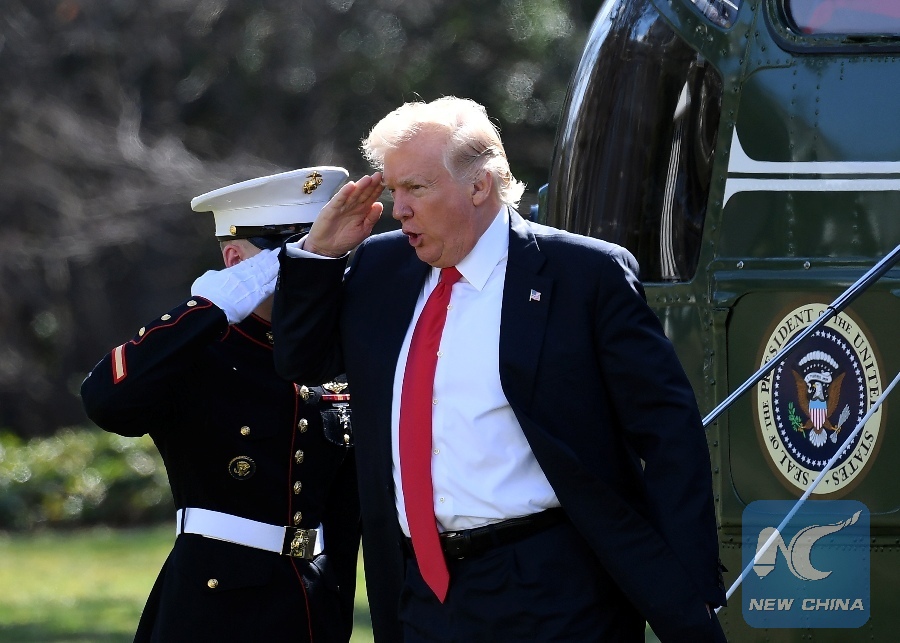 U.S. President Donald Trump walks to the Oval Office after returning to the White House in Washington D.C., the United States, on Feb 24, 2017. (Xinhua/Yin Bogu)

The new document maintained a 90-day ban on nationals of Syria, Yemen, Sudan, Libya, Iran and Somalia, from entering the United States, effective from March 16.

"Each of these countries is a state sponsor of terrorism, has been significantly compromised by terrorist organizations, or contains active conflict zones," the order said.

Nationals of the six countries who are outside the United States will banned from entering the country, except those who are lawful permanent U.S. residences or fit other criteria.

Notably missing from the list is Iraq, which had been subject to a similar ban imposed in January.

"The close cooperative relationship between the United States and the democratically elected Iraqi government, the strong United States diplomatic presence in Iraq, the significant presence of United States forces in Iraq, and Iraq's commitment to combat ISIS justify different treatment for Iraq," the document said.

A review conducted by the Department of Homeland Security, the State Department and the Office of the Director of National Intelligence, will determine after 70 days the order has went into effect whether any countries should be added or removed from the list.

In addition to the travel ban, the order also suspended the decision making on refugee applications for 120 days after the effective date.

The new order was signed in observation of court rulings and to avoid further litigation, the order said.

Trump has signed a similar executive order on Jan. 27, which imposed a ban on nationals of Muslim-majority countries to enter the United States for 90 days, refugees for 120 days and Syrian refugees indefinitely.

A federal judge of the U.S. District Court of the Western District of Washington later slapped a nationwide restraining order on the travel ban, and the ruling was upheld by the Ninth Circuit Court of Appeals in San Francisco.