UN Mission in Colombia starts verification of arms laying down 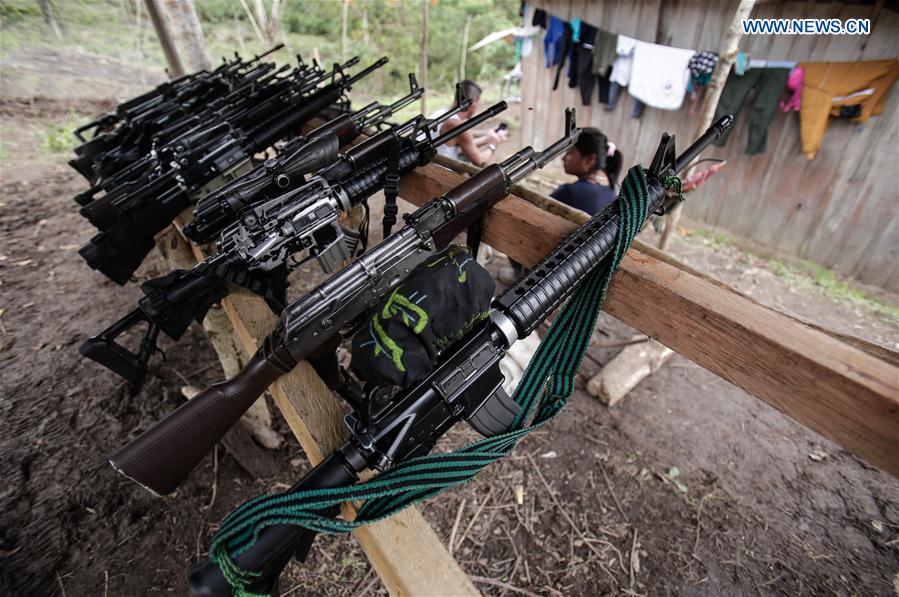 Weapons of members of the Armed Revolutionary Forces of Colombia (FARC) are seen in a transition zone in Icononzo, Tolima department, Colombia, on March 1, 2017. The UN Mission in Colombia is starting the verification of the FARC-EP's laying down of arms, and the process should conclude on May 29, as agreed by the parties, 180 days after the Final Agreement came into force.(Xinhua/Jhon Paz)

UNITED NATIONS, March 1 (Xinhua) -- The UN Mission in Colombia is starting the verification of the FARC-EP's laying down of arms, and the process should conclude on May 29, as agreed by the parties, 180 days after the Final Agreement came into force.

UN spokesman Stephane Dujarric said at a daily news briefing here Wednesday that "despite the logistical challenges, the UN mission welcomes the parties' decision to initiate without further delay the weapons laydown process."

The UN mission, which kicked off the verification process on Wednesday in Colombia, currently has the 450 women and men observers necessary to identify and register all weapons present in the camps in the 26 zones where FARC-EP members will transition to civilian life, he said.

FARC stands for the rebel Revolutionary Armed Forces of Colombia.

Groups of UN mission observers will begin moving into FARC-EP camps, which are still mostly temporary, for the continuous monitoring of the registered weapons.

Simultaneously, the mission will install the containers, which are already in local sites, in the FARC-EP camps. At these storage sites the mission will progressively receive weapons under the constant monitoring of its observers.

As a first step of the gradual storage of weapons process, the mission will receive the armaments from the FARC-EP members who are part of the Monitoring and Verification Mechanism.

In parallel and in coordination with the FARC-EP, the mission said that it will immediately begin the process of planning and verification of the destruction of unstable weapons such as munition, mines and explosives.

This is a partial but substantive advance in the laying down of arms process, which the mission values as a good starting point toward overcoming implementation delays.

"We trust that this process can be accelerated, as part of a virtuous dynamic of simultaneous progress in the implementation of all aspects of the Peace Agreement," the mission said. "This will inspires confidence to those who were party to the conflict and to Colombian society as a whole."

The mission will regularly report on the laying down of arms progress, it said.

The Colombian government and FARC signed a ceasefire and disarmament deal in Havana, Cuba, on June 23, 2016, bringing Colombia a major step closer to ending the more than 50 years of guerrilla warfare in the South American country that claimed hundreds of thousands of lives.

On Nov. 24, 2016, Colombian President Juan Manuel Santos and the FARC leader, Rodrigo Londono, signed the revised peace agreement in the country's capital Bogota. About a week later, the peace agreement was ratified by the Colombian Congress.

In late January, FARC rebels begun their "final march" toward designated transition zones, where they will lay down their weapons as part of a peace deal reached with the government