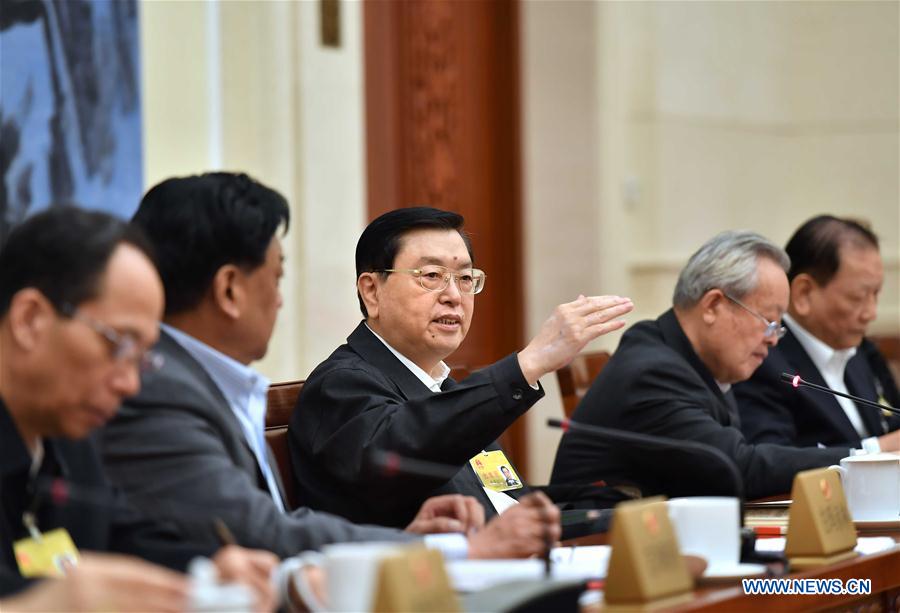 Zhang Dejiang (C), chairman of the Standing Committee of China's National People's Congress (NPC), attends panel discussions to review a report on the work of the NPC Standing Committee, which will be submitted to the annual session of the 12th NPC in March, in Beijing, capital of China, Feb. 23, 2017. (Xinhua/Li Tao)

BEIJING, Feb. 23 (Xinhua) -- Senior Chinese legislators on Thursday heard a report on the work of the National People's Congress (NPC) Standing Committee, which will be submitted to the annual session of the 12th NPC in March.

Zhang Dejiang, chairman of the NPC Standing Committee, presided over the meeting.

At panel discussions reviewing the report, lawmakers said the national legislature had made achievements in implementing central authorities' decisions, including dealing with the Liaoning electoral fraud, adopting an interpretation of Article 104 of the Basic Law of Hong Kong Special Administrative Region and approving pilot supervisory system reform.

Legislators agreed that fresh results had been achieved in legislation, such as making draft general rules of the civil code and revising inbound investment laws following successful trials in free trade zones, and called for more efforts to improve the country's NPC system.

Also on Thursday, Zhang presided over a meeting of the chairpersons of the NPC Standing Committee, hearing a series of reports.