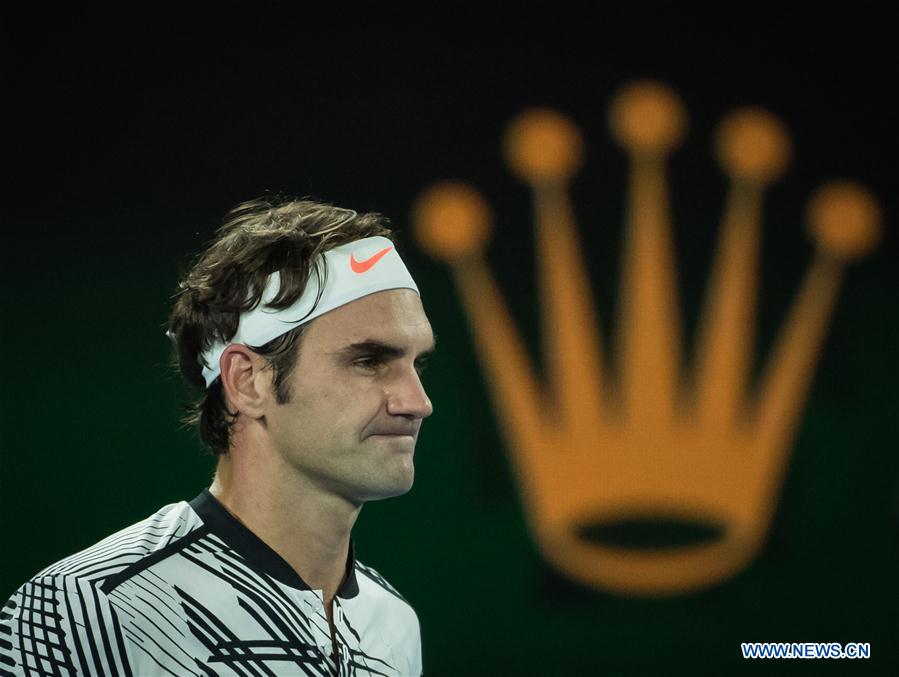 Before the finals, the world no. 17 told reporters if he was to win against Nadal, it "would be super special and very sweet" because he hasn't beaten the Spanish stalwart in a Grand Slam since Wimbledon in 2007, and suffering defeat the last three times they met at the Australian Open.

"He should be happy. I would have been happy again to be in the finals," thus "this one will take more time to sink in."

"The magnitude of this match is going to feel different. I can't compare this one to any other one except for maybe the French Open in 2009. I waited for the French Open, I tried, I fought, I tried again and failed. Eventually I made it. This feels similar."

It started as a tense battle in the first set where neither player was willing to push too hard in fear of giving the other a break, before Federer managed to exploit Nadal's weak side, rushing the net and attacking his backhand before firing a winner on the other side of the court in the seventh game.

Nadal responded in the second however, taking the first four points of the set. Federer had a chance to break back in third point after the Spaniard sent the ball too deep with the Swiss ace running to the net, but two consecutive errors on increasingly aggressive play allowed Nadal to save serve. Federer took one break back in the fifth game with a winner, but Nadal held on.

The Australian crowd became more animated in the third, pushing Federer to save two break points in the first game -- Nadal fired a forehand straight into the net -- when his net play wasn't working, only to break the world No. 9's serve the next game.

Things went from bad to worse for Nadal, only saving one game, the first time he was held to a 1-6 set score since a fourth round loss at last year's U.S. Open to frenchman Louis Pouille in five sets.

It was after that match he sidelined himself to recover from a plaguing wrist injury that forced his retirement from the 2016 French Open, despite "taking risks" to play the 2016 Rio Olympic Games where took gold in the doubles.

"If I won that one (Australian Open final), (that) will be amazing, but the real thing that makes me more happy, more than titles, is go on the court and feel that I can enjoy the sport," Nadal told reporters.

"Today I am enjoying the sport.

"At this moment in my career... more than all these kind of things (winning titles) is being healthy enough to work the way I need to work, to fight for the things I want to fight. I'm going to keep trying to do and to work the same way."

Nadal responded in the fourth set, exploiting net play of Federer while the Swiss was taking more and more risks, pushing the ball ever so wide while attacking the Spaniards forehand, sending it to a deciding, and thrilling fifth.

Federer took an off-court medical time out in the set break, something he said in just his previous match didn't help for his groin injury that he had been nursing throughout the match, but may clear the mind to focus on what was ahead.

"Today... I felt my quad midway through the second set already, and the groin started to hurt midway through the third set," Federer said, adding the time "did a little bit, potentially" help the injury in the Wawrinka semifinal, but "I' m not sure."

"I just told myself, the rules are there that you can use them, (but) I also think we shouldn't be using these rules or abusing the system."

But momentum was behind Nadal early on, breaking Federer's serve in just the first game on the second break point after the champion pushed the ball too wide on the Spaniard's backhand. Federer broke back in the sixth game to raucous cheers, attacking Nadal's backhand to fire a forehand winner, shifting momentum to his side of the court to break again just two games later.

Serving had become a nightmare for Nadal after the first break, suffering "a lot" each time, "even if I played great in the breakpoints."

"That's what I needed in that moment, and I didn't had.

"Then the way that he played, he can put the balls in or not, and he put a lot of balls in, taking a lot of risks, and taking the ball very early, playing very fast.

"So then he had the success. Well done for him."

The final game of the match summed up how close and tense a battle it was between the two legends of the modern era with Federer saved two break points on a resurgent Nadal. The final point of the match was challenged by Nadal, however Federer's winner that was fired into the far right tape on the Spaniard's forehand - who was expected another attack on his backhand - was ruled in.

Being free in the set was something Federer discussed with his team prior to the match after becoming a little tense in his semifinal against Stan Wawrinka, where being "free in your head" and in your shots, "the brave will be rewarded here."

"I had opportunities early on in the fifth, as well, to get back on even terms. I could have been left disappointed there and accepted that fact, (but) I kept on fighting, I kept on believing, like I did all match long today, that there was a possibility I could win this match," Federer told reporters, adding it was slightly awkward to win on a challenge.

"I think that's what made me play my best tennis at the very end the match, which was actually surprising to me."

Despite losing this match, Nadal has had an exceptional full month in Australia, providing a platform for the year ahead, especially the French Open on clay.

"If I am able to play like this, to hold matches like I hold the other day, and recover well as I recovered, but on clay I recovered better than here, then the opponents don't get that many free points," Nadal told reporters.

"And (if) I am playing solid from the baseline, if I made that happen, I think I can keep having success in hard courts, but on clay can be special." 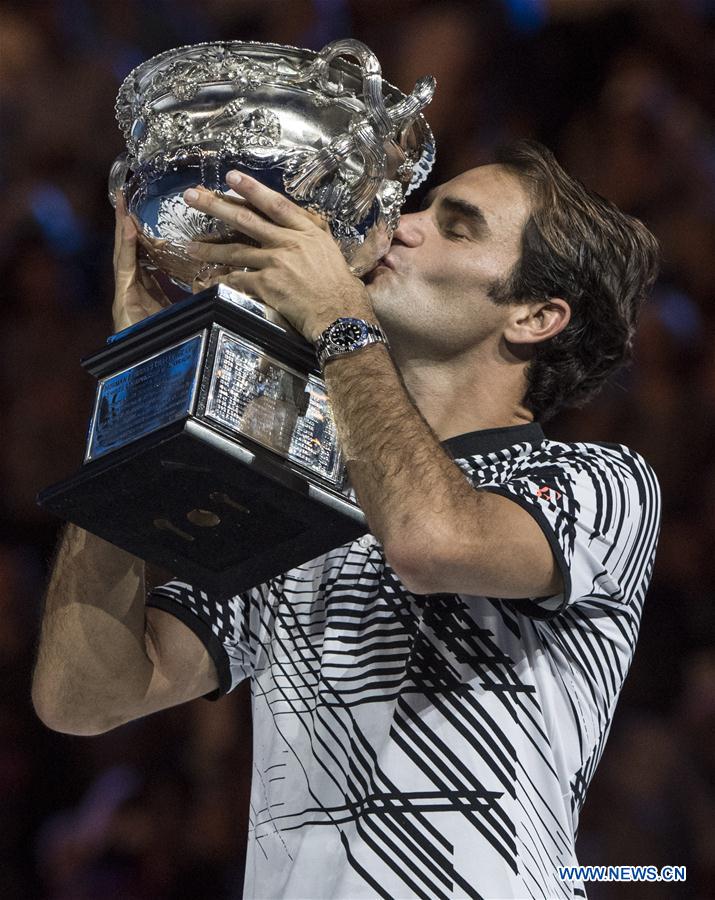 Roger Federer of Switzerland kisses his trophy during the awarding ceremony for the men's singles event at the Australian Open tennis championships in Melbourne, Australia, Jan. 29, 2017. (Xinhua/Lui Siu Wai)