Dow ends above 20,000 for first time ever on upbeat earnings 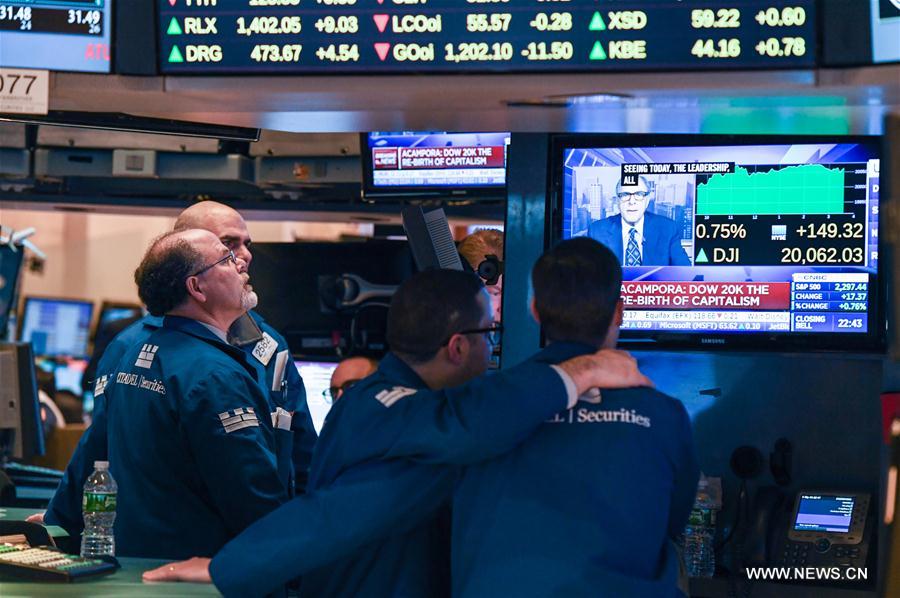 Traders work at the trading floor of the New York Stock Exchange in New York, the United States, on Jan. 25, 2017. The Dow Jones Industrial Average on Wednesday closed above the psychological mark of 20,000 points for the first time ever, while the other two major indices also finished at record highs, boosted by a batch of generally positive earnings reports. (Xinhua/Li Rui)

NEW YORK, Jan. 25 (Xinhua) -- The Dow Jones Industrial Average on Wednesday closed above the psychological mark of 20,000 points for the first time ever, while the other two major indices also finished at record highs, boosted by a batch of generally positive earnings reports.

Investor euphoria was initially ignited by Wednesday's upbeat Earnings reports as well as an across-the-board stock rally around the world, which made the Dow open directly above the milestone of 20,000.

The latest data from Thomson Reuters showed that the S&P 500 companies' blended earnings in the fourth quarter of 2016 are expected to rise 6.8 percent year on year, while the revenues are forecast to increase 4.1 percent. Both the fourth-quarter earnings and revenues are much-better-than they are in the second quarter and third quarter.

In Asia, Tokyo shares leapt Wednesday, with the Nikkei index rebounding to above the 19,000 level, on renewed optimism about U.S. President Donald Trump's economic stimulus policies.

"When they see President Oks the pipelines and a variety of other things, there is the assumption that he is step by step going to review every one of his campaign promises," Legendary New York Stock Exchange floor trader Arthur Cashin said Wednesday.

Most analysts attributed Wednesday's increases to a continuous "Trump Rally". U.S. stocks posted solid gains after Trump won the presidency election On Nov. 8, with the Dow going up over 9 percent till Wednesday, as investors bet that he would pursue massive corporate tax cuts, deregulation, and infrastructure spending.

"Dow passing 20,000 Points represents part of the very strong optimism that the market is taking on that the new administration will be able to successfully pursue its policies of tax reform and regulatory relief for the corporations," Humberto Garcia, Head of Global Asset Allocation for Bank Leumi and Chairman of Leumi Investment Services' Investment Committee, told Xinhua.

However, facing uncertainties both from the new administration and the U.S. Federal Reserve, analysts became cautious on the outlook of the U.S. equities.

"The market is somewhat getting ahead of itself. It is now on a price to earnings basis higher than any time since the dot come bubble. And I' m not sure that it is completely justified being at those levels," said Garcia.

There are some countervailing forces to the tax reforms and regulatory relief, and these are in part due to potential trade retaliation from other countries, and also due to potential that U.S. exports are hurt by a strong U.S. dollar, he added.

The Fed is also in focus. "The next thing we' ll be looking for is we are going to go into the quiet period for the FOMC. They have got a meeting coming up, and we'll see how aggressive they are in the statement and that will get everybody' s attention," Cashin said.

"I believed that the Fed will at least try to stick to its announced or planned slow rate hikes. My concern is that we might return to the pattern of 2004 when there was rapid rate hikes," Garcia said.