HAVANA, Jan. 20 (Xinhua) -- Under Donald Trump, the future of the ties between Havana and Washington remains uncertain, despite a recent thaw, according to a Cuban expert.

Trump will be sworn in as the 45th president of the United States on Friday.

Luis Suarez, a Cuban expert on international relations, believes Trump's administration will maintain some of Barack Obama's policies towards Cuba, but revert others.

"They are going to make a case-by-case analysis of which policies are suitable, not only for the bilateral relationship, but for their own interests," Suarez told Xinhua in a recent interview.

"Cuba is perceived by the designers of U.S. military and security policies as an ally in the fight against drug trafficking, uncontrolled migration and transnational crimes, and Trump shouldn't modify that," said the academic, a professor at Havana's Higher Institute of International Relations.

However, Trump had criticized outgoing President Barack Obama's rapprochement with Cuba as "weak," and signalled he would strong-arm Havana into making more concessions to the United States.

Trump will be more disposed to applying "hard power," that is military or economic mechanisms, to sway Cuba, in contrast to the soft-sell approach of his predecessor.

"The rather original and creative soft power that Obama used, a combination of persuasion and smarts, won't be continued. Trump is likely to use more instruments of hard power, including negotiating with Cuba through force and coercion," Suarez said. 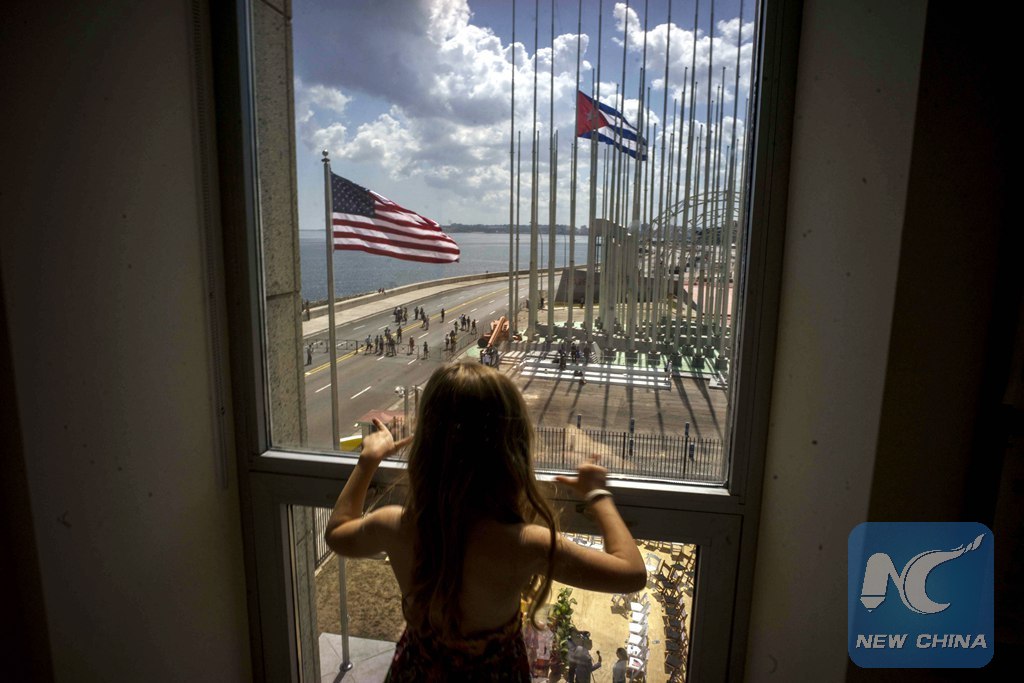 In this Aug. 14, 2015 file photo, a girl looks out from the newly opened U.S. Embassy after the U.S. flag raising ceremony in Havana, Cuba, as part of officially restored diplomatic relations. (AP Photo/Ramon Espinosa, File)

In general, Suarez doesn't expect the "environment of reciprocity and mutual respect" that has characterized negotiations since December 2014 to prevail.

The two countries have signed 21 agreements in different areas such as environmental protection, maritime safety, joint search and rescue, air transport, energy and others.

Many of these accords may be subject to a "re-analysis of policy toward Cuba, from their perception that Obama made many concessions to the Cuban government," Suarez said.

One positive sign has been the incoming administration's response to Obama's scrapping of the "dry foot-wet foot" immigration policy, which exclusively lured Cubans to the United States with the promise of fast-track residency, and has for decades made a mockery of legal migration.

According to the White House, Trump's team was told of the move before it was announced on Jan. 12, and so far there have been no objections.

In the past two weeks, Washington and Havana have inked cooperation agreements on joint responses to potential oil spills in the gulf and the Florida Straits; on law enforcement and information sharing; and on maritime and aeronautical search and rescue.

U.S. policy toward Cuba still aims to bring about regime change, Suarez warned, so it's possible Trump will crank up confrontation.

In view of a possible setback in bilateral ties, Suarez said the Cuban government must continue to diversify its international economic relations and develop "proactive policies."