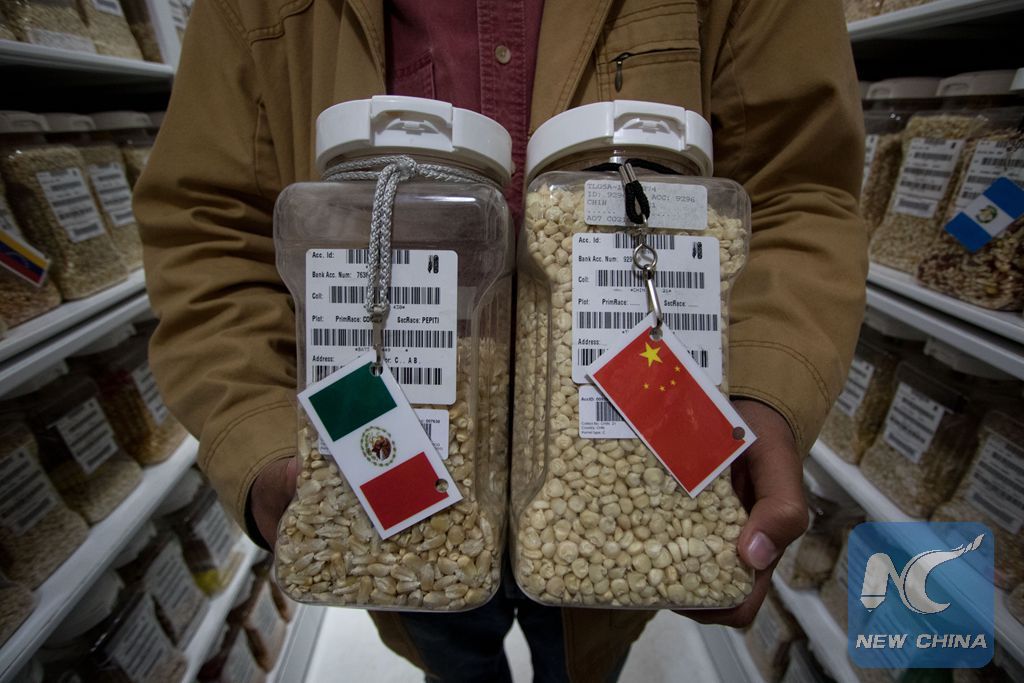 Image taken on Jan. 13, 2017 shows a staffer holding canisters of maize grains from Mexico and China, at the Maize and Wheat Improvement Center (CIMMYT), in Texcoco, Mexico. (Xinhua/Francisco Canedo)

MEXICO CITY, Jan. 18 (Xinhua) -- When a team from the International Maize and Wheat Improvement Center (CIMMYT), headquartered near Mexico City, ascended the stairs of the Great Hall of the People in Beijing to receive China's International Science and Technology Cooperation Award, it marked the culmination of 32 years of collaboration.

Over those 32 years, CIMMYT has been integrated in promoting improved scientist training, maize and wheat production in China as the most populous country in the world has grappled with food security, a rising middle-class, changing diets and climate change.

This collaboration has led to over 40 maize hybrids and 60 wheat varieties being developed in China based on CIMMYT resources.

However, as CIMMYT's director general Martin Kropff told Xinhua on Wednesday, the challenges are far from over.

"When we started 32 years ago, crop yields were very low in China. Today, they are pretty high. Because of this, the challenge to increase yields even further in a sustainable way is much higher. Yields have to increase, as China has a huge population. Food security is at stake," said Kropff.

He explains that as Chinese diets are changing, more maize and wheat are necessary, especially as feed for animals. "Much more production is needed. With changing climate, yields go down. We want genetic gains, yields increase every year to keep up with population and demand, which is a huge challenge. This is why Chinese institutions want to collaborate with us and invest in us." 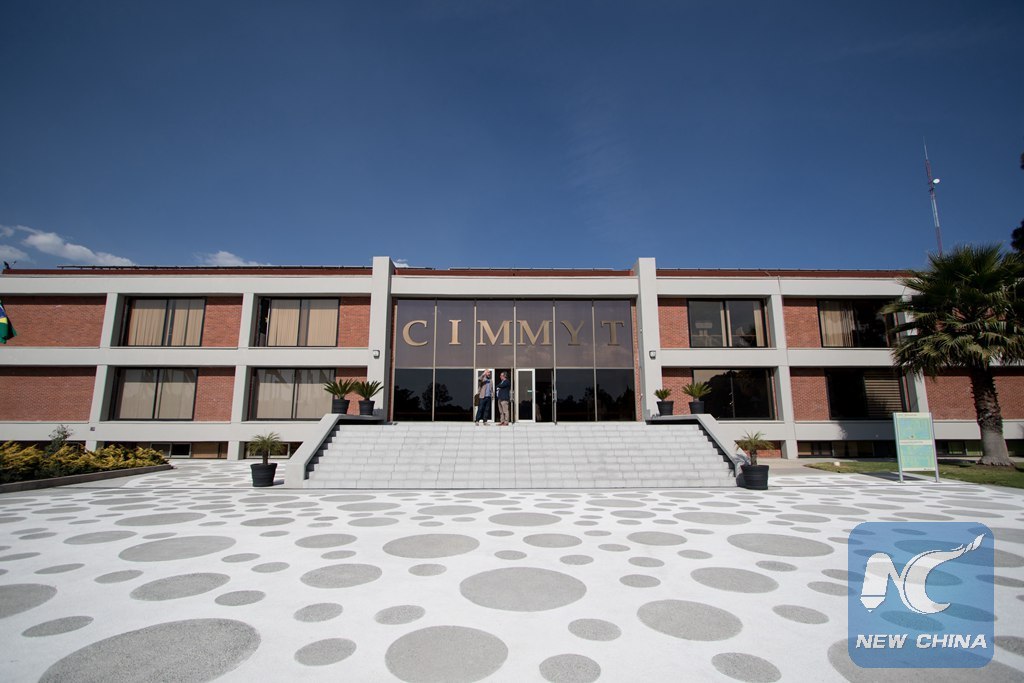 This collaboration has also seen more than 350 researchers from China to visit CIMMYT research centers in Mexico and several regional offices for academic research or training.

However, one important question is how CIMMYT ensures these technological breakthroughs reach the local communities and farmers in China.

"As we are funded by donors, like the Bill and Melinda Gates Foundation or countries like China, we give the new varieties for free to small-scale companies and national systems. The Chinese organizations bring that to the farmers," he added.

But a variety is not enough. The breakthrough made by CIMMYT and its Chinese partners also require parallel technological development in order to ensure higher yields and more sustainable agricultural systems.

CIMMYT works extensively in China on sustainable intensification, looking at how farmers practice their trade and how they manage crops or the soil.

Best practices for conservation agriculture are also a pillar of CIMMYT's recommendations.

"We've exchanged with China on the three principles of sustainable agriculture - reduced tillage such as use of tractors, permanent soil cover with mulch to protect from soil erosion, and rotation with legumes," says Bruno Gerard, the director of CIMMYT's Sustainable Intensification Program.

Alongside this, Gerard explains that this collaboration works on strategic areas such as nutrient management. "We can actually increase farmer profitability if we reduce the use of fertilizer and provide advice on placement and timing of application of fertilizer."

In order to maximize research opportunities and potential applications, CIMMYT has established strong partnerships with national institutions in China, such as the Chinese Academy of Agricultural Sciences, and universities, such as Yunnan Agricultural University.

The latest of such cooperation, finalized in January, will see a new wheat and maize research center open at Henan Agricultural University (HAU). Funded by the province of Henan, the center will be staffed by scientists in genomic-bioinformatics and physiology-crop management, among others. 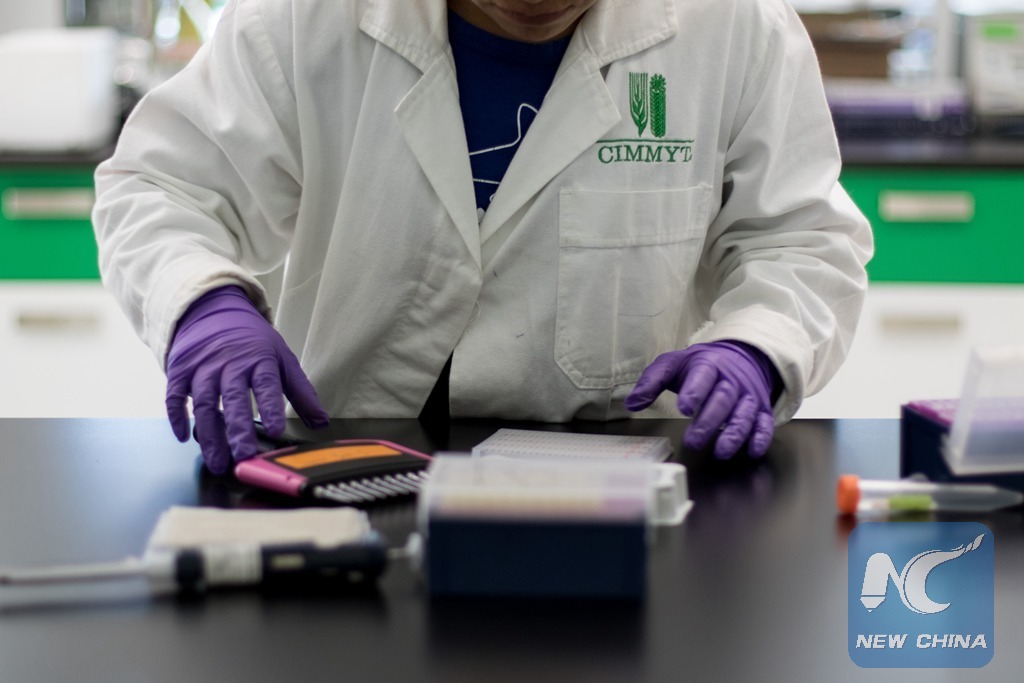 The location of this latest partnership is no coincidence. Henan is China's largest agricultural province, where farmers produce crops from two wheat-maize planting rotations each year.

During his visit to Beijing to receive the award, Kropff met with Chinese President Xi Jinping and Vice Premier Liu Yandong. "They told me they have the ambition of China being the country of science and innovation, of new technological development. They want to innovate to make China sustainable as soon as possible."

In August 2016, Liu visited CIMMYT's headquarters during an official visit to Mexico to further the collaboration. At the time, Liu made clear that China saw this collaboration as crucial to its national agricultural sustainability.