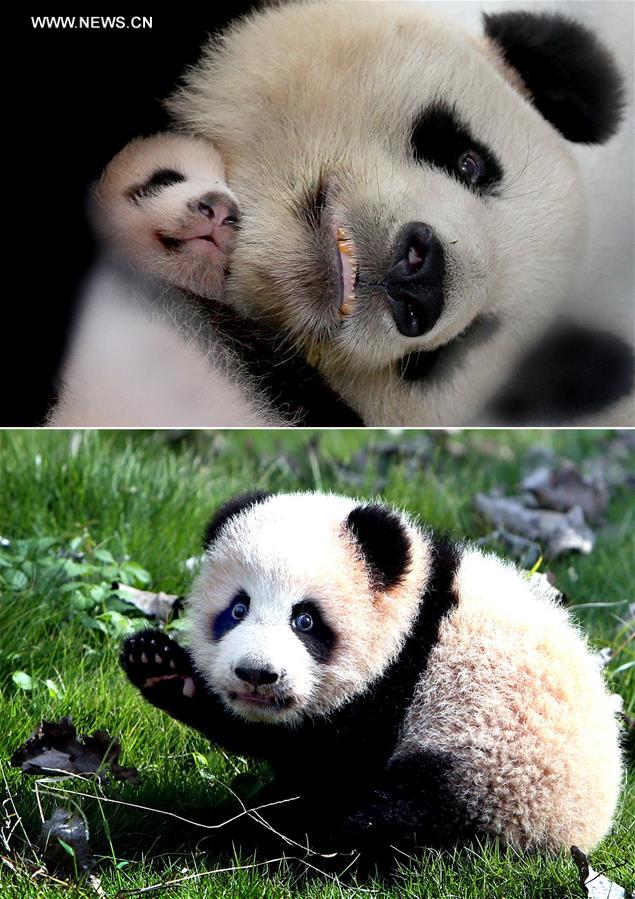 The combo picture shows giant panda cub "Hua Sheng" sleeping in the arms of its mother "Guo Guo" on Sept. 9, 2016 (up) and "Hua Sheng" playing at the Shanghai base of the Chinese Giant Panda Protection and Research Center on Nov. 4, 2016 (bottom) in Shanghai, east China. The 21-year-old giant panda mother "Guo Guo" and its six-month-old cub "Hua Sheng" died of diseases late December, the Shanghai Wild Animal Park announced on Jan. 19, 2017. (Xinhua/Fan Jun)

The mother was quarantined for treatment on Dec. 19 shortly after she showed symptoms of fever, vomiting, diarrhea, stomachache and discharged intestinal mucus. Her situation turned critical on Dec. 22 when she began to suffer convulsions.

Hua Sheng was taken away from her mother, and bottle fed after her mother fell ill, but started showing symptoms of vomiting, stomachache and discharged intestinal mucus four days later.

On Dec. 29, Hua Sheng had surgery, eliminating more than 80 centimeters of her intestine, after a CT scan found she had advanced bowel and intestinal problems. However, she did not survive long.

Two veterinarians and a breeder from the China Conservation and Research Center for the Giant Panda helped treat the pandas.

Samples from the pandas have been sent to researchers in Shanghai and Changchun cities, as well as Sichuan Province, the giant panda's natural habitat, to figure out how and why they became ill.