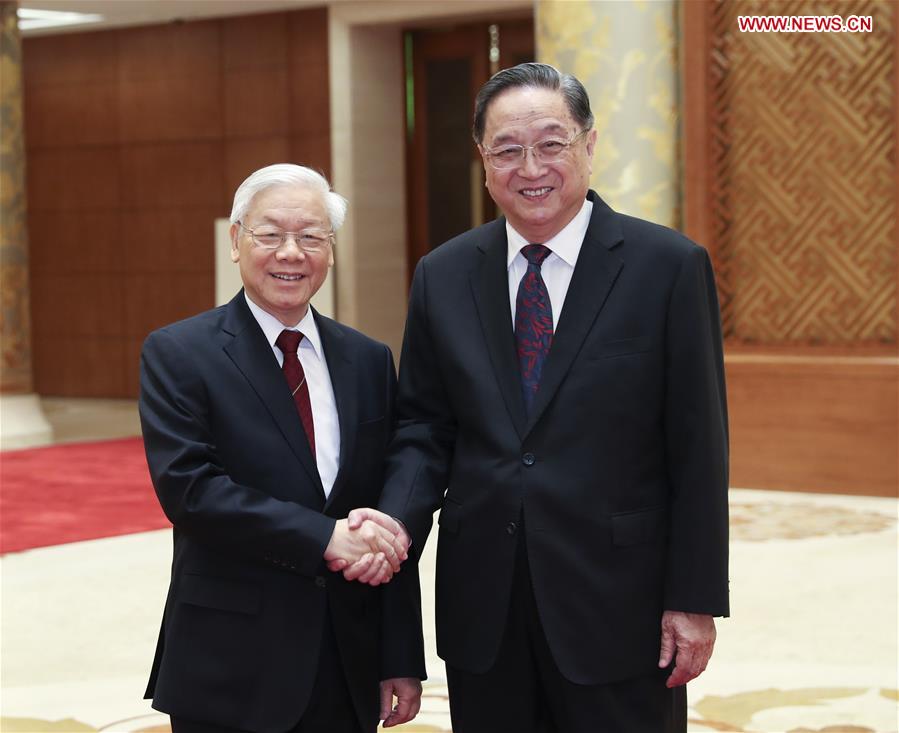 Yu, who is chairman of the National Committee of the Chinese People's Political Consultative Conference (CPPCC), said China-Vietnam ties had entered a new stage of sustained healthy and steady development under the guidance of both countries' top leaders.

The current situation had not come by easily and, thus, should be all the more valued, said Yu.

He called on both countries to make the most of the opportunity to enhance strategic communication, strengthen political mutual trust and pragmatic cooperation, and expand people-to-people exchanges to inject new dynamic into the comprehensive strategic partnership of cooperation between the two.

The CPPCC is willing to further deepen exchanges with Mat Tran to Guoc Vietnam (Fatherland Front of Vietnam) to contribute more to China-Vietnam ties, he said.

Trong, for his part, said it is the consensus between Vietnam and China to boost traditional friendship and bilateral comprehensive strategic partnership of cooperation.

The Vietnamese side spoke highly of the relations between the Fatherland Front of Vietnam and the CPPCC and hopes they will make greater contribution to developing bilateral ties, Trong said.

After the meeting, Yu and Trong attended a grand reception marking the 67th anniversary of the establishment of bilateral diplomatic ties as well as the upcoming Lunar New Year.

China and Vietnam established diplomatic ties on Jan. 18, 1950. Both countries celebrate Lunar New Year, which falls on Jan. 28 this year.

Trong arrived in Beijing on Thursday for a four-day official visit.