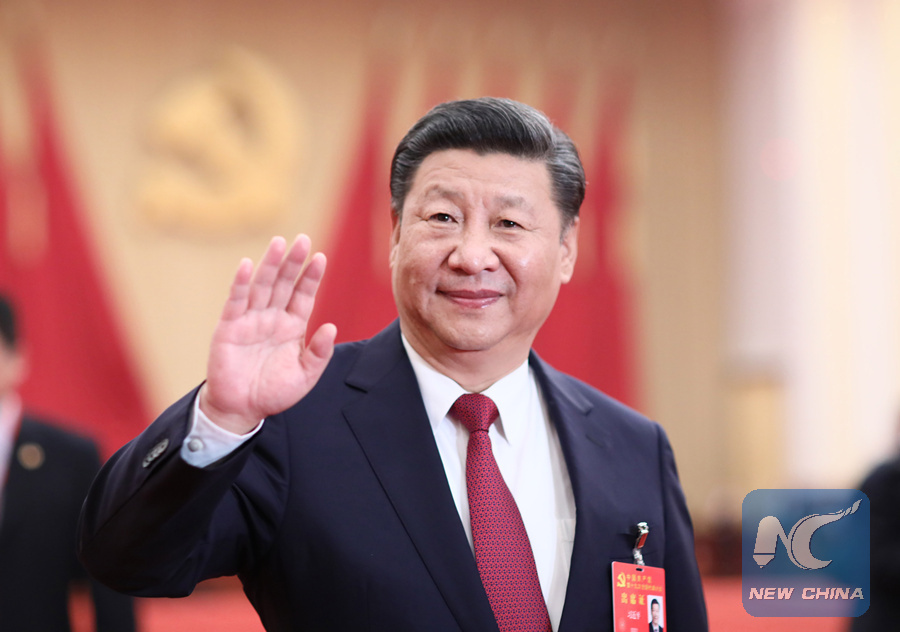 Xi Jinping, general secretary of the Communist Party of China (CPC) Central Committee, who is also Chinese president and chairman of the Central Military Commission, meets with delegates, specially invited delegates and non-voting participants of the 19th CPC National Congress at the Great Hall of the People in Beijing, capital of China, Oct. 25, 2017. (Xinhua/Lan Hongguang)

MOSCOW, Oct. 25 (Xinhua) -- China has made great achievements over the past three decades under the leadership of the Communist Party of China (CPC), and will keep on making new breakthroughs in the future, a Russian Communist Party stalwart has said.

Today, China is the world's second largest economy and has outstripped the United States in a number of fields, Gennady Zyuganov, leader of the Communist Party of Russia since 1993 and four times a contender for presidency, said at a press conference on Monday, responding to a question on China's socialist path.

"(China has) the highest rate of development. (China's) average (growth) rate in the last 30 years was about 10 percent. It does (China) credit," he said.

"(They) are building it on the basis of (their) millennia-old history, (with their) hard-working people and (their) capacity to solve problems looking to the future," he said.

Now China needs to make a leap for greater scientific and technological progress and rectify environmental problems, he added.

"I believe that (the Chinese) leadership has shown wisdom ... making it possible to give the younger generation a more prominent role in governance," he said.

The CPC concluded its landmark 19th national congress in Beijing Tuesday, reaffirming China's socialist path. The party constitution included the thoughts of President Xi Jinping, who is also general secretary of the CPC Central Committee, on socialism with Chinese characteristics.

The inclusion is titled "Xi Jinping Thought on Socialism with Chinese Characteristics for a New Era".

In an earlier interview with Xinhua, Zyuganov had said China's achievements were made possible by the wise policy of its leadership, who adhered to socialism and set ambitious but well-thought-out goals for decades to come, particularly the "two centenary goals."

"My comrades and I have no doubts that China (will be) able to achieve its 'two centenary goals,'" Zyuganov told Xinhua.