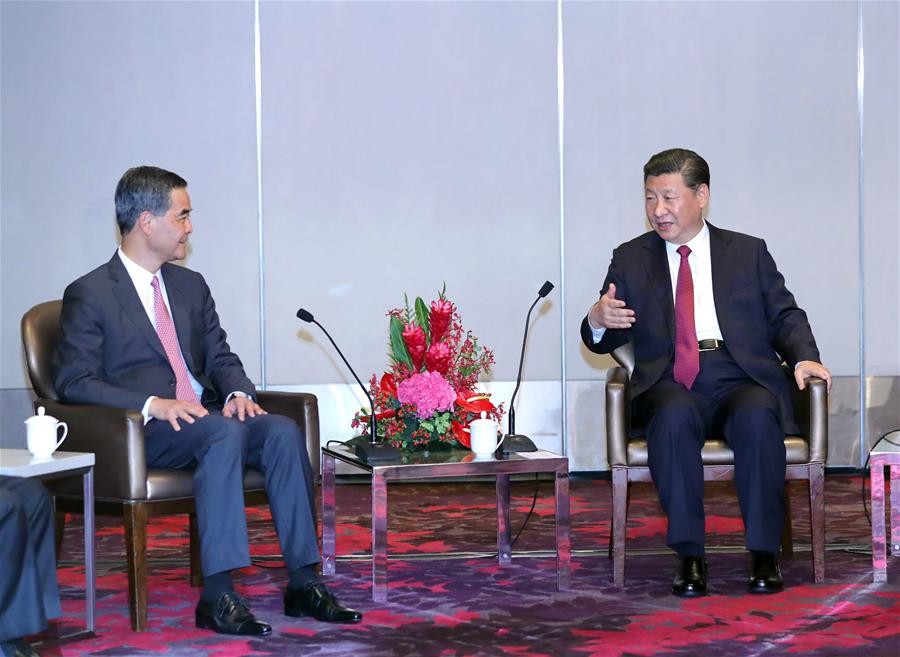 With the strong support of the central government, Leung had led the HKSAR government to earnestly implement the principle of "one country, two systems" and the HKSAR Basic Law, and made arduous efforts to solve deep-rooted problems accumulated over the years in Hong Kong and expand the HKSAR's space for future development, Xi said.

Leung and the HKSAR government have staunchly safeguarded national sovereignty, security, development interests, and social stability, making positive contributions to the undertaking of the "one country, two systems," Xi said.

The president expressed his hope that Leung would continue to serve Hong Kong and the country on his new post, and contribute his wisdom and strength to the undertaking of the "one country, two systems" and national development.

Leung was elected vice chairman of the 12th National Committee of the Chinese People's Political Consultative Conference at the closing meeting of the annual session of the top political advisory body in March.

Leung said Hong Kong's sound economic development and social stability could not have been achieved without Xi and the central government's care and support.

Hong Kong could next give play to its advantages and seek complementary development with the mainland to dovetail with the country's 13th five-year plan, the Belt and Road Initiative and the building of the Guangdong-Hong Kong-Macao Greater Bay Area city cluster, he said.

Leung also vowed to make due contributions to Hong Kong and the country with his expertise and experience.

Xi arrived in Hong Kong earlier Thursday for a three-day trip to attend celebrations marking the 20th anniversary of Hong Kong's return to the motherland and the inauguration of the HKSAR's fifth-term government. He will also inspect the SAR.

Accompanied by Leung, Xi also met with senior figures of the SAR's executive, legislative and judicial bodies on Thursday afternoon.

During the meeting, Xi said the practice of "one country, two systems" has been very successful in Hong Kong.

The concept has led to Hong Kong's peaceful return to China, a rare case in Chinese and foreign histories, where lost lands were mostly recovered by force, he said.

After its return in 1997, the special administrative region system provided for by China's Constitution and the Basic Law of the HKSAR took root in Hong Kong.

"Our practice has fully proven that 'one country, two systems' is absolutely correct and is pulsing with life," the president said.

He said the central government highly appreciates the work of the current administrative team of the HKSAR.

Over the past five years, members of this team led by Leung have diligently performed their duties and earnestly implemented the "one country, two systems" principle and the Basic Law of the HKSAR, fulfilling their responsibility for the nation and history, Xi said.

They should also work to expand exchanges and cooperation between Hong Kong and the mainland, and lead the younger generation to carry on the tradition of loving the country and Hong Kong at the same time, in order to make new contributions to building Hong Kong into a better place and realizing the Chinese dream of national rejuvenation, the president said.