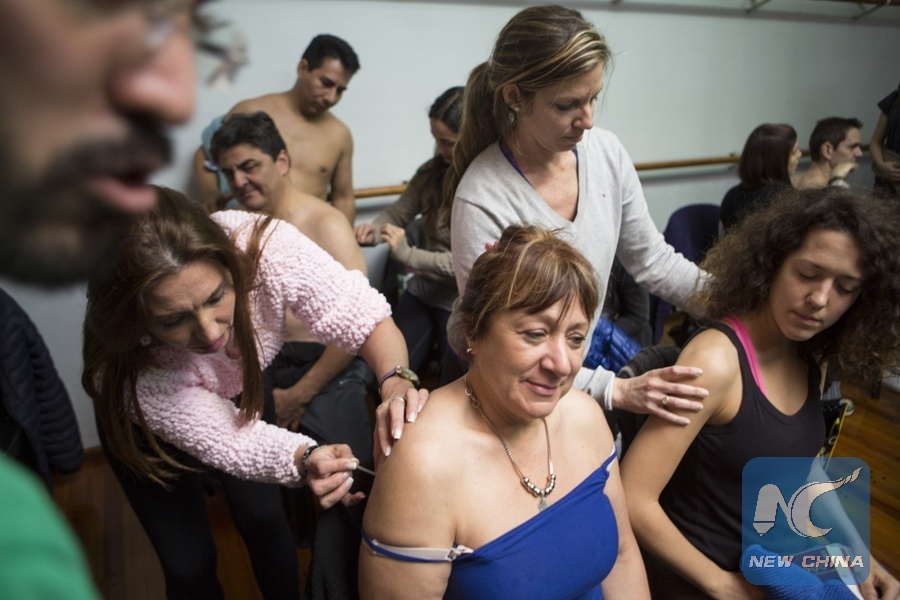 File photo taken on May 21, 2016 shows that students practice acupuncture during a class in the School of Naturetherapy and Traditional Chinese Medicine (ANMO) in Buenos Aires, Argentina. (Xinhua/Martin Zabala)

WASHINGTON, June 27 (Xinhua) -- A modern type of acupuncture can help treat urinary leakage in women, but the ancient technique was not effective in treating infertility in those with polycystic ovary syndrome, according to two Chinese studies published Tuesday by the U.S. journal JAMA.

In one study, Baoyan Liu of the China Academy of Chinese Medical Sciences and colleagues found that electroacupuncture, or acupuncture involving electrical stimulation, improved stress urinary incontinence (SUI), an involuntary leak of urine in women that usually occurs during coughing and sneezing.

To prove this, the researchers randomly assigned 504 women with SUI to receive 18 sessions of electroacupuncture involving the lumbosacral region or sham electroacupuncture with no skin penetration on sham acupoints over six weeks.

For the electroacupuncture, paired electrodes were attached to needle handles and stimulation lasted for 30 minutes with a continuous wave of 50 Hz and a current intensity of one to five mA.

Among the randomized participants, 482 completed the study.

What's more, the effects persisted 24 weeks after treatment and the incidence of adverse events was low.

"Further research is needed to understand long-term efficacy and the mechanism of action of this intervention," the authors wrote.

In another study, Xiao-Ke Wu of Heilongjiang University of Chinese Medicine and colleagues assessed whether acupuncture, either alone or combined with a widely used fertility drug called clomiphene, increases the likelihood of live births among women with polycystic ovary syndrome.

Polycystic ovary syndrome, which affects five to 10 percent of women of reproductive age, is the most common cause of female infertility.

While clomiphene is a first-line, inexpensive treatment used to induce ovulation in women with the infertility problem, it has had a high failure rate.

The researchers randomly assigned 1,000 women with polycystic ovary syndrome to active or control acupuncture administered twice a week and clomiphene or placebo administered for five days per cycle, for up to four cycles.

Among the women in the study, 250 were randomized to each group. In the end, a total of 926 women completed the trial.

The researchers found that the live birth rate was significantly higher in the women treated with clomiphene than with placebo.

However, the rate was not significantly different between women treated with active versus control acupuncture.

"This finding does not support acupuncture as an infertility treatment in such women," the researchers wrote.

"These studies shed new light on when and when not to consider using acupuncture, although why and how this procedure may work require further study," Josephine Briggs and David Shurtleff of the U.S. National Institutes of Health said in an accompanying editorial.

"Clearly these ancient practices are helping reveal the complexity of the links between the mind and the body."